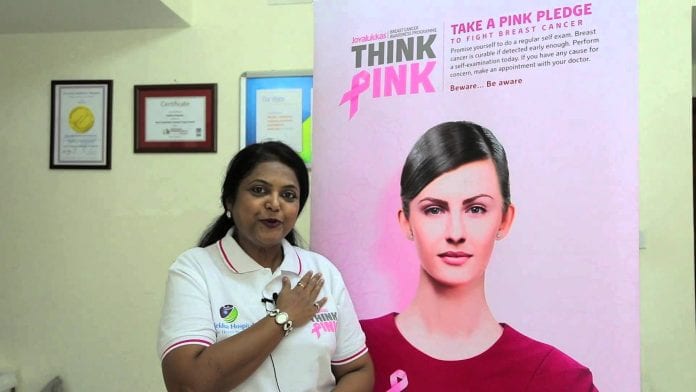 Take the pink pledge to know your risk and take steps to protect yourself!

Most people who develop breast cancer have no family history of the disease. However, when a strong family history of breast and/or ovarian cancer is present, there may be reason to believe that a person has inherited an abnormal gene linked to higher breast cancer risk. Some people choose to undergo genetic testing to find out. A genetic test involves giving a blood or saliva sample that can be analyzed to pick up any abnormalities in these genes.

Women with mutations in the genes BRCA1 or BRCA2 are five times more likely to be diagnosed with breast cancer, according to the National Cancer Institute (NCI) That means that 60 percent of women with a BRCA mutation will develop breast cancer in their lifetime, compared to 12 percent of women in the general population. But less than 1 percent of women actually have a BRCA mutation, making costly genetic testing unnecessary for most. While the decision to get tested is a personal one, here are some guidelines that can help you make the call:

For women who are not of Ashkenazi Jewish descent, the NCI recommends genetic testing if you have:

About 2 percent of adult women have a family history pattern described above but, again, less than 1 percent of women will have a BRCA mutation.

Women without one of the family history patterns described above are unlikely to have a harmful BRCA mutation, according to the NCI.

Carrying a BRCA gene mutation does not guarantee a breast cancer diagnosis, but some women opt to reduce their risk with surgery. In May, Angelina Jolie explained her decision to surgically remove both breasts — an operation known as a preventive double mastectomy — after testing positive for a BRCA1 gene mutation.

“Once I knew that this was my reality, I decided to be proactive and to minimize the risk as much as I could,” wrote the 38-year-old actress, who lost her mother to ovarian cancer in 2007 and her aunt to breast cancer in 2013.

Studies suggest that preventive mastectomy can reduce breast cancer risk by about 90 percent in high-risk women, according to the NCI. But surgery carries risks, too, so women are advised to talk to their doctors about the procedure’s pros, cons and possible alternatives.

Thanksgiving: If the Feast is Back, so are the Leftovers

US Opens COVID Boosters to All Adults, Urges them for 50+