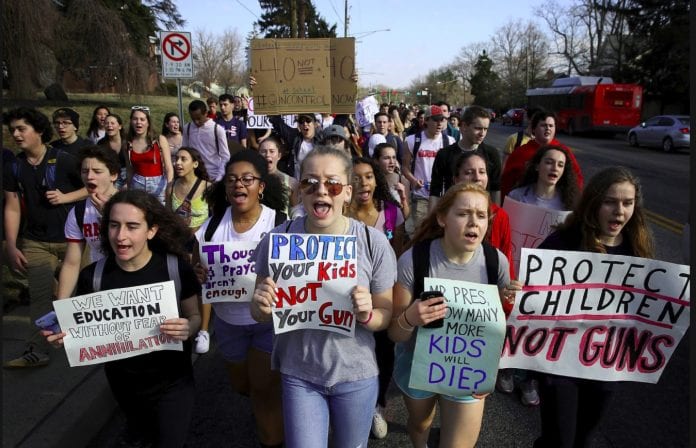 From the various media reports it definitely appears the March for Our Lives on March 24 was more successful than even anticipated. The march planned by students of Marjory Stoneman Mason High School days after the tragic mass shooting on that campus involved over a million young-people and adults marching in Washington D.C.; Parkland, Florida, and several other cities across America.

Birth of a genuine movement

The massive response to this march, primarily seeking  lawmakers to pass tighter gun control laws, and the extent of its organization, indicates the birth of a genuine movement. And, although this movement is one initiated and organized by youth, it would be wrong to designate it as a youth movement.

The youth initiative has attracted millions of American adults who not only share the young people’s quest for more stringent gun control laws, but who want to see changes in the nation’s political representation.

Fair or unfair, there are people, who have criticized the March for Our Lives and the budding pro-gun control movement, for gaining momentum out of a tragedy affecting mainly white kids from an affluent American city.  But Saturday’s march was strong evidence of America’s racial and economic diversity. Marching along with the survivors of the shooting at the Parkland school were survivors of shootings in African American neighborhoods in Chicago, and other schools and cities. It’s a truly positive sign that those involved in this new movement are tolerant of their racial differences.

Movement must be solidified

As successful as Saturday’s march may have been, this does not solidify what now looks like a movement. For a movement to be successful it must be sustained, bred life into continually, to meet its objectives.

The sight and sounds of thousands of people marching and gathering on American streets isn’t going to prompt members of the US Congress diametrically opposed to  gun control legislation to suddenly change their minds. Even if the consciences of these lawmakers are touched by the intensity of the march, and the powerful speeches made, their deep-rooted ideology is unlikely to budge in changing their minds or their votes.

But, while it may not be easy to change the minds of these lawmakers, the undercurrent of the movement can be strong enough to remove them.

The youth involved in this new movement have also embarked on a mission to aggressively register as many qualified young people, and people generally, to vote in the pending November mid-term general elections, and the 2020 presidential/general elections. It’s this registration drive, challenging though it may be, that will determine the success of this new movement.

Nationally, rising political dissatisfaction, has already signaled the md-term elections could be more significant than previous ones. Now, this new movement, including the voter registration drive, and the call to “vote out” law makers who are against the movement’s agenda, could see a significant change in an election traditionally notorious for low voter turnout.

Many who refuse to heed the appeal, are stuck with political leaders whose ideology and objectives vastly differ from theirs. These non-voters are often the first, and the loudest, to criticize these political leaders, when in fact they ought not be critical for usually it was their non-vote that placed these leaders in office.

Movement must not relent in registration drive

It’s hoped that the new movement will not relent in its efforts to register new voters, including Caribbean Americans, who could be eligible to vote in November,

The March for Life may have spawned a movement for radical changes. These changes will not likely materialize unless more Americans turn out to vote for politicians committed to making these radical changes.