PORT OF SPAIN, Trinidad, CMC – Prime Minister Dr. Keith Rowley says there’s no need for surgery after undergoing a series of medical tests regarding his heart in the United States.

Rowley, 69, who left here earlier this month for California after indicating that he had been “delinquent” in dealing with the situation after the doctors had informed him of the matter in 2017, posted a picture of himself and his doctor on his Facebook page.

“All smiles at lunch with my cardiologist. Today I was told there is no need for surgery. I will remain under observation for a few more days and return home soon,” he wrote.

Rowley said he was thankful “to everyone who prayed and sent well wishes to me and my family.

“We appreciate the warmth and love you showed during this period. My family and I will forever remember your kindness. It is yet another example of the goodness of the people of Trinidad and Tobago,” he added.

Rowley had told reporters earlier this month that he should have gone back to do these tests last year September, but had delayed the visit since he was dealing with the national budget and the closure of the state-owned oil refinery, PETROTRIN. 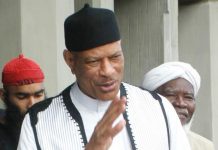