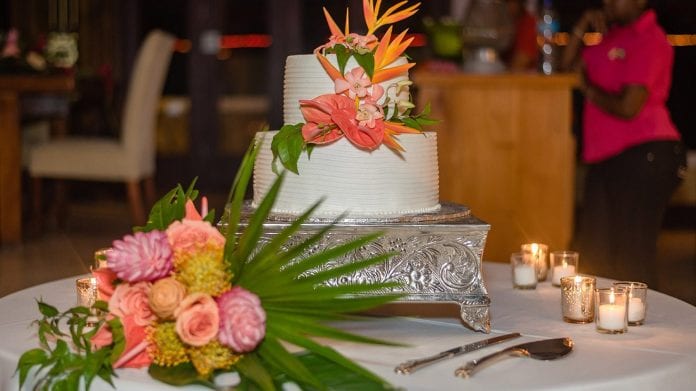 The black cake is the traditional wedding cake across  much of the Caribbean.

The black cake made its way to the Caribbean via England, with the recipe spreading across the region and being customized within each country, to its people’s liking. Today, this cake is called by several different names, including Christmas cake, fruit cake, black cake, and sometimes even a rum cake. During the colonial days the recipe spread through the West Indies causing each island to customize their own version of the Black Cake.

This same cake is also used for several occasions in the Caribbean, and is the cake of choice for weddings,  Christmas gatherings and New Years celebrations. As a matter of fact, during the Christmas season, these cakes can be found in many people’s homes ready to be nibbled on by the household and visitors alike. The distinctly fruity and rum-filled aroma cake while it is being baked, it a typical fixture of the Caribbean Christmas.

For wedding purposes, the cake can last up to six months, as it is both baked with rum, and sprinkled with rum once it has left the oven. This serves as a tasty preservative.

The black cake has a dense texture, dark brown color, and a rich flavor. It’s appearance is close to that of a chocolate cake, with a dark color that comes from its main ingredients of dried fruits, soaked in rum and local wine. These fruits include prunes, currants, raisins, and cherries, which are all chopped and soaked for months, or even years, before baking. This fruity concoction is added to batter with flavorings and spices, to make the perfect cake for any Caribbean occasion.

For many across the Caribbean, if the black is used for a wedding, the bottom tier of the cake is cut by the bride and groom, and shared with the guests, while the top tier is put in the freezer to celebrate the couple’s first anniversary. In some countries it is believed that, on the wedding night, a sliver of the second tier of the cake should be placed under the bride and groom’s pillow, in order to guarantee conception. 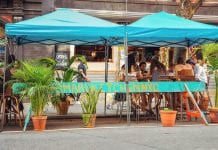