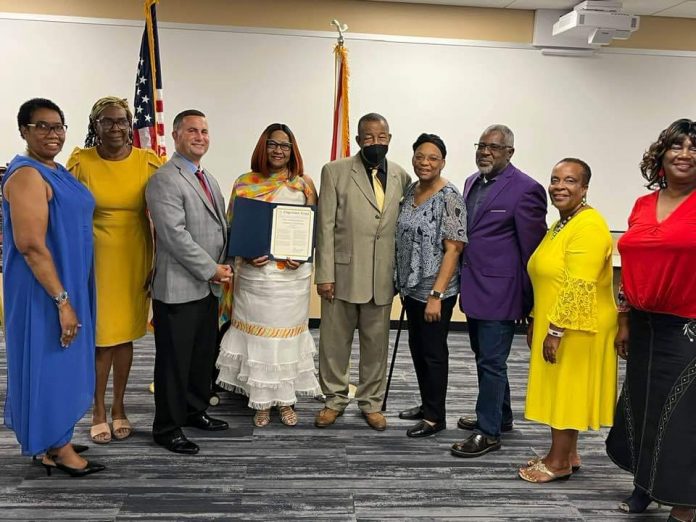 Orlando-based Jamaican broadcaster Diana “Lady D” Blake-Taylor was recognized by Florida’s House of Representatives for her contributions to Central Florida’s community through her broadcasting, entrepreneurship, and humanitarian efforts.

The title of Blake-Taylor’s autobiography was also placed in the Congressional Record by Florida House Representative Darren Soto to close out Caribbean-American Heritage Month in June.

Lady D has been a well-recognized voice throughout the Caribbean-American community in Florida for over 40 years. She hosts a weekly radio program, “Young People’s Forum” every Tuesday on WOKB 1690 AM, 100.7 FM, and live streams on Facebook.

She is also heavily involved in the Caribbean community and has assisted students and parents who have experienced hardships.

Lady D was born in Clarendon, Jamaica. She attended Baillieston Primary before moving on to Clarendon College and Holmwood Technical High.

In 1969, she migrated to the United States settling in the Bronx. Blake-Taylor attended school in New York, during which time she met her husband.

There they started a long-haul trucking business until 1980, then moved to Orlando. The couple eventually branched out, opening a store that sold Caribbean groceries and other goods. They also operated a gas station.

According to Blake-Taylor, she saw the need to advertise her business to the community but struggled to find a radio station that was willing to do so.

She eventually landed on a Spanish station that allowed her to purchase time on a Sunday afternoon from 4-6 o’clock.

The radio show expanded to a daily program from noon until 8:00 p.m. Mondays to Saturdays, growing in stature and recognition. The platform was used to spread Caribbean culture throughout Central Florida and led to growth in more Caribbean businesses and diverse voices on radio.

While Blake-Taylor is now semi-retired, she continues with her radio program. She has also received numerous honors for her significant contribution to the Caribbean diaspora in Central Florida.