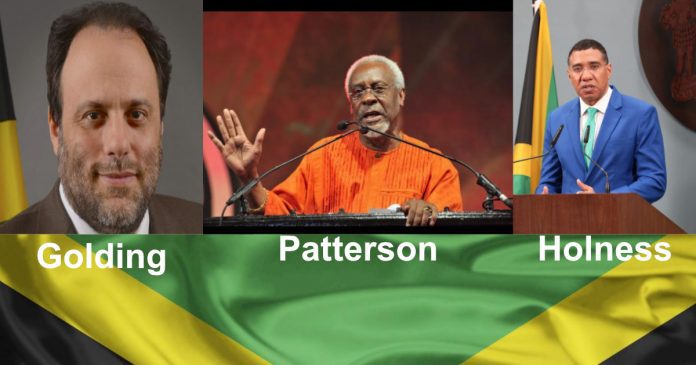 Former prime minister of Jamaica, PJ Patterson, has ignited the call for Jamaica to ditch the Queen as head of state and operate under a republican system of government by 2022. This comes less than 48 hours after Barbados severed ties with the chief occupant of Buckingham Palace as their ceremonial head of state. Next year will be Jamaica’s 60th year of independence from Britain and Mr Patterson feels that the move will be “a truly historic landmark” for the country’s Diamond Jubilee.

In a three-page letter obtained by Caribbean National Weekly to both Prime Minister Andrew Holness and Leader of the Opposition Mr. Mark Golding, Jamaica’s longest-serving prime minister urged both gentlemen to sit down and iron out the “single outstanding issue” that could present a challenge to Jamaica becoming a republican state. The issue he said is “whether the incumbent [head of state] should be chosen by a two-third membership of both houses sitting separately or jointly.” Mr. Patterson advised both gentlemen that “one early Vale Royal meeting” between them could easily settle the issue.

Jamaica’s inclination to be a republic since 2002

Jamaica has shown an inclination to become a republic from as far back as 2002 according to Mr. Patterson. “For some time before we entered our fortieth year of independence, our country has been actively engaged in extensive discussions and consultations on moving towards a Republican system,” he reminded them. Continuing, he said: “The political parties you both lead have repeatedly accepted the institution of our own indigenous President as head of State. This has been reflected in the election manifestos of both the JLP and PNP since 2002.”

He said successive prime ministers have reiterated that firm intention at their inaugural installations and reaffirmed their policy positions in numerous throne speeches from the dawn of the millennium.

In 2012 then prime minister, Portia Simpson-Miller placed the item on the agenda in her inauguration speech to the country. Since then, the subject has gained traction. Both parties have talked about having a Jamaican head of state and even promised a referendum on the matter. Mark Golding stated earlier this year in the Independent that “This is fundamental to our identity and our nationhood,” referring to the removal of the queen.

Former Prime Minister Bruce Golding stated in his 2011-2012 budget debate that “he wanted Jamaica to make its 50th year of Independence free of its colonial ties to the British monarchy.”  In his presentation, Golding told his fellow law makers that “I have long believed that if I am to have a queen, it must be a Jamaican queen.”

Current Prime Minister Andrew Holness and his JLP government have also voiced similar sentiments on Jamaica attaining republican status.  When he took office after the 2016 elections, his government declared at the time that they would amend the constitution to replace the queen with a non-executive president as head of state.

Patterson himself had declared that Jamaica should aim to achieve republican status by the time he left office in 2006.

In July 2020, fifty-five percent of Jamaicans said the queen should go, while thirty percent wants her to remain, according to a Bill Johnson poll in the Jamaica Observer.  And according the Gleaner, a constitution commission in 1995 recommended that Jamaica should no longer have the monarchy as head of state.  But in spite of all the political talk and aspirations, no Jamaican government has taken the bold steps necessary to install a Jamaican as head of state.

In satisfying the constitutional requirements to amend the “deeply entrenched provisions,” Mr. Patterson said that section 49 allows: “A period of three months between the introduction of the bill and the commencement of the first debate on the whole text of the bill in the house, and a further period of three months between the conclusion of that debate and its passage.” According to section 49(ii) he said, “the bill has to be submitted not less than two months nor more than six months after its passage through both houses to the electorate.” This according to him “means a referendum.”

Of the eight referendums held to decide the fate of the queen, only three have been successful: Ghana, South Africa and Gambia (second one). St. Vincent and the Grenadines was part of the losing set when their referendum was defeated by 12 percent in 2009. Trinidad and Tobago went through parliament with a new constitution in 1976 and Guyana did the same with a constitutional amendment 1970. Barbados started out with the intention of going the route of a referendum, but it was postponed twice; in 2003 and 2007. But with a super-majority in parliament, Prime Minister Mottley flexed her political capital and bypassed the Barbadian population.

Mr. Patterson feels that a referendum would be a “spectacular contribution” to building Jamaica’s parliamentary democracy; “permitting both parties to share a single platform in a campaign to secure national approval and allow one of our own image to become head of state.” He said that it “would inspire the fullest confidence” in the Jamaican people.
At the end of last month, Prime Minister Andrew Holness told the Jamaican people that there will be a comprehensive review of the Jamaican constitution in 2022. In addition to the goals outlined by the prime minister for the review, some are speculating whether it is a precursor to handing Queen Elizabeth II her goodbye papers.

Interestingly, Buckingham Palace gave the prime minister a post-nominal title in May of this year, making him a member of the UK Privy Council. At the time, many persons wondered if he would be able to serve the queen and Jamaica effectively, especially when many Jamaicans and his government are pushing for “reparatory Justice.”

Earlier this year Jamaica’s Culture minister, Olivia Grange said she “wants to petition Her Majesty for compensation for all the nation’s citizens.” She further stated that, “We are hoping for reparatory justice in all forms that one would expect if they were to really ensure that we get justice from injustices to repair the damages that our ancestors experience.”

Former Prime Minister Patterson has more than reparations on his mind at this time, however. In closing his letter to the two political leaders, he said that: “It would be repulsive to contemplate a Diamond Jubilee where our constitution rests on an order in council dated the 23rd July, 1962 and a head of state who does not reflect our own image and enables every Jamaican to aspire in reaching the highest position within our native land.”

See full text of letter below