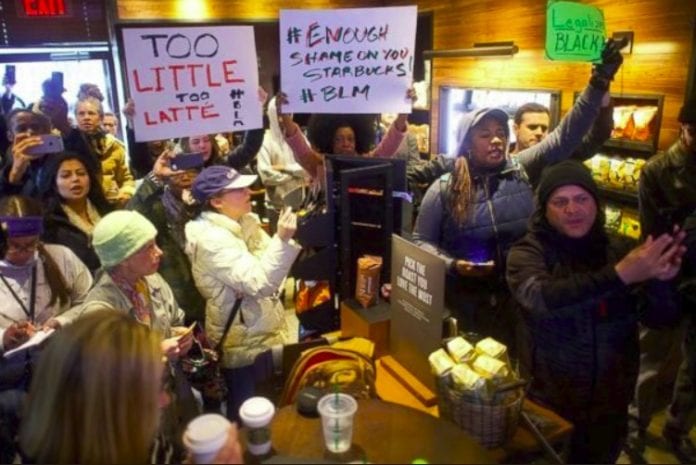 Arising from the recent disgusting display of racism at a Starbuck store in Philadelphia where two black men were handcuffed and escorted form the store simply because they were waiting on a friend, Starbucks Coffee company announced a half-day training in racial bias education. On the afternoon of May 29, the company will close 8,000 of its stores across the US to train its staff attempting to prevent racial discrimination in its stores.

Judging by response on social media the company’s pending training has been met favorably by most people.

However, stepping back and taking an objective look, it seems the company is taking the usual ‘Band-Aid’ remedy that society tends to treat various social problems.

Won’t stop racists from being racists

Surely, training sessions by Starbuck isn’t going to stop some its employees from being racists. The training, though commendable, may instruct racist staffers how to deal with people of different races on the job, but won’t likely prevent them from continuing to be racists off the job.

The core problem of racism in America is it has become an institutionalized cultural norm, imbedded in American society. Some people are not even aware they are racists until they confront someone of another race and display prejudicial behavior towards that person. Until racism is challenged at its core, instilling in every American, like Rev. Martin Luther King, Jr., attempted to do, they are born equal and are to be treated equal, racism will continue throughout the society.

One of the disquieting aspects of racism in America is the inherent correlation to crime.

For many people of other races, particularly, the white race, the black race is stereotyped as the race from which crime emanates.

Regardless of the social standing of a black individual,  when that individual walks into a white-owned business place, even one as common as a Starbuck store, he/she is feared as a criminal suspect. Not to mention walking into high-end department or jewelry stores, or businesses in predominantly white neighborhoods. Surely, as the sun rose this morning, black people will be copiously monitored as potential shoplifters when they enter these stores today.

t’s because black people are racially stereotyped why they are often victims in racist encounters.

Trayvon Martin, a black teenager, innocently walked through a North Florida residential complex where his father lived but was shot dead by a white man who suspected the youth to be a criminal because he was black and wearing a hoodie.

Anther young man was gunned down dead by police in his grandmother’s backyard in Seattle, Washington, because he was suspected to be a criminal holding a gun which turned out to be a cell-phone.

In New York, a black man, mentally challenged, holding a silver shower-head, was instantly gunned down, again by police, because he was suspected of brandishing a gun.

Two black men simply waiting on friends in a Starbuck store in Philadelphia were suspected to be criminals.

The common thread in the above incidences, is black race; an evidence of the institutionalized racism. This is the racism that, bar blacks from better jobs; more  placement in Ivy-league colleges, political advancement; access to some neighborhoods; causes police harassment while driving; and regularly places black people on the adverse side of the judicial system.

While some people in White America marginalize and fear blacks as criminals, the American society continue to discard increasingly large black communities upgraded from “ghettos” to “inner cities.” These communities are, nonetheless, still struggling, suffocating slumps. Still, sprawling communities characterized by deplorable, overcrowded housing, high unemployment, poor healthcare, teen pregnancies, undereducated single-mothers; and male youth hustling against each other, and the outside world, for financial survival.

Of course, many people from the black community have removed themselves from the social tentacles that tend to strangling aspects of this community. But, still these people are black and likely to be arrested as criminal suspects entering their million-dollar homes at night, or simply driving a luxury car.

Against this sordid institutionalized racism, it can be understood why some people regard Starbuck’s planned afternoon training as a ‘Band aid’ approach to racism. They think this is similar to society building prisons to hold criminals, instead of trying to solve the core problem of crime.

Until the rank and file of society move to socialize anti-racism throughout institutions like the public school system, churches, the workplace, law enforcement, the judicial system and other aspects of every community, racism will continue to rare its ugly head. Sadly, society continue to avoid the serous business of anti-racial socialization with various Band-aid measures.