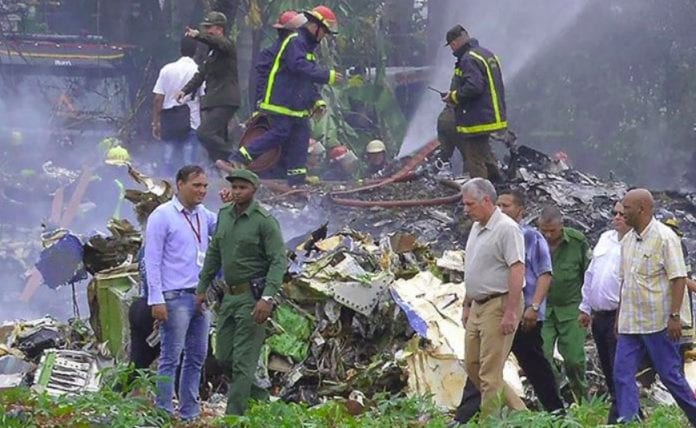 The Caribbean Community (CARICOM) has extended condolences to Cuba after a Boeing 737 passenger plane crashed on take-off in Havana on Friday, killing at more than 100 people.

“The Caribbean Community expresses its condolences and its solidarity with the government and people of the Republic of Cuba following the tragic crash of a plane carrying some 100 passengers shortly after takeoff from the Jose Marti International Airport in Havana on Friday,” CARICOM Secretary General Irwin La Rocque said in a message to President Miguel Díaz Canel.

“The Caribbean Community extends its deepest sympathy to the families of the victims and its sincere wishes for the speedy recovery of those passengers who were injured during this unfortunate aviation accident,’ La Rocque said.

There are unconfirmed reports that among the dead could be nationals from at least one Caribbean Community (CARICOM) country.

Cuban officials spoke of a “high number of victims” after the Boeing 737-400 on an internal flight from Havana to Holguin in Eastern Cuba crashed while taking off from the airport.

Initial reports said there were 104 passengers and 8 crew on board, but that figure was later revised after it was disclosed that there were nine crew.

Three seriously injured survivors had been taken to hospital after being pulled from the wreckage, but one succumbed to injuries.

State-owned media reported that the 26-year-old Boeing 737-400 (I-BPAC), was being operated by Blue Panorama Airlines for Cubana. The aircraft was built in 1979 and leased by Cuban airline Cubana from a small Mexican firm called Damojh, according to the Mexican government.

The authorities said they were seeking to identifying bodies. Wreckage of Flight CU972 was strewn over the crash site area, 12 miles south of Havana.

President Diaz-Canel said the cause of the crash was not immediately known.

In his condolence message, La Rocque said that the people of the Caribbean Community “share the grief of the People of Cuba at this moment of national mourning”.