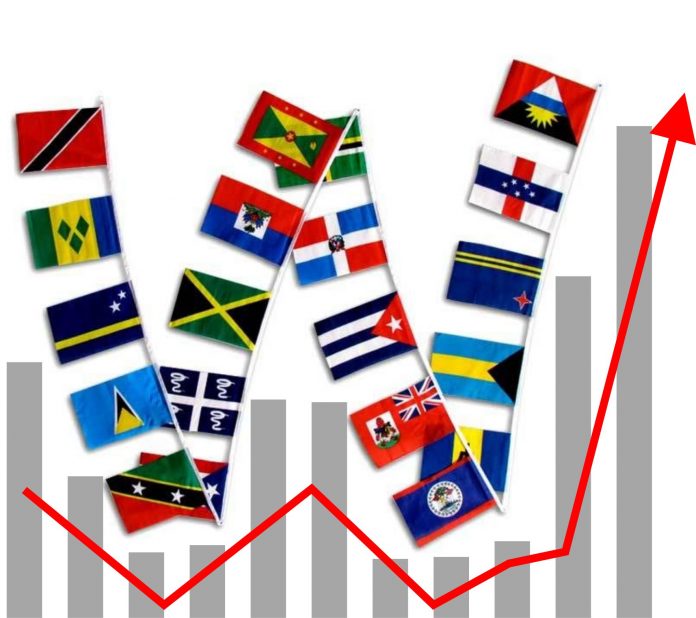 Citizens in most Caribbean countries should see positive changes in their economic activities and well-being in 2022, as the World Bank is projecting increases in Gross Domestic Product (GDP) over 2021 figures.

This should have some relief for members of the Caribbean diaspora who sent a major part of the estimated $126 billion to families and friends in Latin America and the Caribbean in 2021. The growth according to the World Bank is on account of the expected timing of the recovery in international tourist arrivals.  Almost every Caribbean country depends on tourism for needed foreign exchange and economic sustenance.  According to statista.com, tourism contributed 24.5 percent or roughly $24 billion to the region’s gross domestic product (GDP) in 2020.

Guyana has the most significant GDP growth

Of all the countries referred to in the Bank’s report, Guyana is projected to have the most significant growth.  The Guyanese economy is expected to grow by 49.7 percent, after coming off an estimated 21.2 percent increase in 2021.  In 2020 when every Caribbean country experienced declining gross domestic productivity (GDP), Guyana’s economy grew by 43.5 percent.  In 2019 the South American state was the fastest growing in the world.

The catalyst behind Guyana’s growth does not fit into the mold of the World Bank’s projected growth engine, however.  Tourism accounts for only 0.58 percent of the country’s GDP.  Instead, the recent discovery of vast oil fields has provided hurricane type winds beneath the wings of its economic growth.

The only country of the lot that will see a decline in GDP is Jamaica.  The island’s productivity will move from an estimated 4.3 percent in 2021 to 3.0 percent in 2022.

Regionally, growth is estimated to rebound in Latin America and the Caribbean (LAC) when the final numbers are in for 2021, said the Washington-based financial institution.  Its estimates showed an increase of 6.7 percent for last year, driven by favorable external conditions and pandemic-related developments.

The Bank said strong demand in key export destinations – the United States and China- high commodity prices and continued high remittances to Central American and Caribbean countries were also supportive of growth in 2021.

Looking ahead, the World Bank said regional growth is projected to soften, to 2.6 per cent in 2022 and 2.7 per cent in 2023, as fiscal and monetary policy is tightened, improvements in labour market conditions continue to be sluggish, and external conditions become less supportive. The recovery to pre-pandemic levels of gross domestic product (GDP) will be uneven across the region, and prolonged in some countries.

But even though bullish in its growth projections, the bank highlighted some associated risks.   It said the risks to growth in the LAC include spikes in COVID-19 cases, financing and debt-related stress, and disruptions from extreme weather events and natural disasters.

“The durability of economic recovery in LAC, as elsewhere, depends on the control of the pandemic. COVID-19 outbreaks, including those triggered by new variants of the virus, remain a downside risk even in countries with high vaccination rates,” it said

In October last year, the bank warned that debt of low-income countries rose to records levels.  That report stated that “external debt stocks of low- and middle-income countries in the Caribbean and other places combined, rose 5.3 per cent in 2020 to US$8.7 trillion.”

Many Caribbean leaders have voiced their concerns on the consequences of external debt on the survival of their countries, especially as it relates to the effects of the COVID-19 pandemic.  In March last year, Prime Minister Andrew Holness of Jamaica, made a plea to have further extension of the Debt Service Suspension Initiative (DSSI) of the Group of 20 (G-20) countries.  The Prime Minister said at the time that: “In this respect, we support the proposal by the Economic Commission for Latin America and the Caribbean (ECLAC) to address the liquidity needs of Caribbean countries, through the creation of a Caribbean Resilience Fund.”

Antigua and Barbuda’s Prime Minister Gaston Browne, said in reference to the small island developing states (SIDS), that “Right now, many SIDS confront the danger of collapsing from a massive economic sclerosis, arising from the deep economic wounds created by COVID, to include the attendant debt crisis.”

Commenting further on the risks associated with its projections, the World Bank stated that, “Economic disruptions related to extreme weather, partly related to climate change, and other natural disasters pose a significant risk not only for the regional growth outlook but also for the lives and livelihoods of people living in the region. “

Last year the damage from hurricanes in the Caribbean was not as significant as previous years.  Elsa caused the most damage, killing three persons and causing major damages in the Lesser Antilles.  Hurricane Grace also caused damage to Haiti while it was still recovering from a major earthquake.   Nonetheless, the Caribbean is forever in the path of natural disasters, especially from hurricanes.