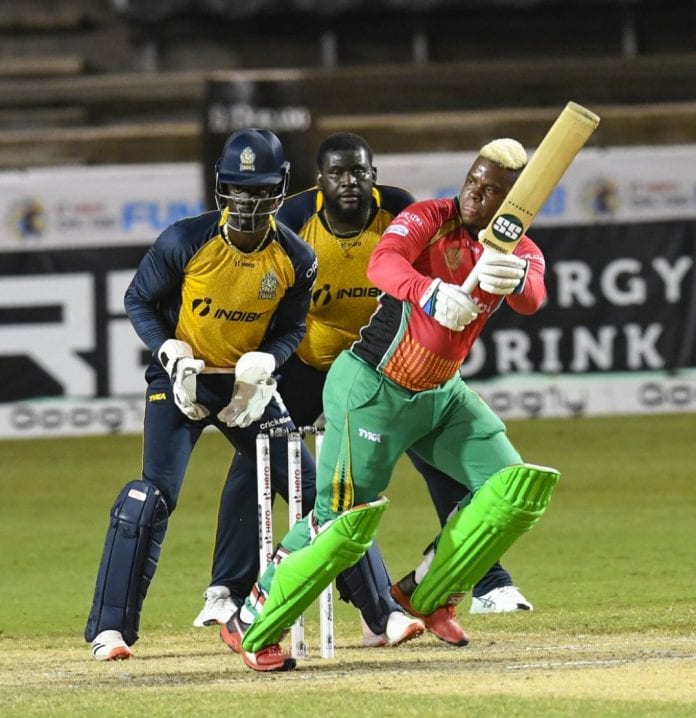 A woeful batting performance from reigning champions Barbados Tridents sent them crashing to an embarrassing eight-wicket defeat to Guyana Amazon Warriors on Tuesday night, putting them on the brink of elimination from the tournament.

Entering the contest on the back of five defeats from seven outings – including back-to-back loses in their last two fixtures – Tridents never looked the part at the Brian Lara Stadium and crashed to 92 all out off their 20 overs.

At one stage, they looked in danger of being dismissed for the lowest ever total in the Caribbean Premier League, with the innings laying in complete ruin at 27 for eight in the 12th over.

But New Zealander Mitchell Santner, batting at number seven, held the innings together with 36 off 27 balls to be the only batsman to pass 20.

Most of the damage was done by 20-year-old Afghan seamer Naveen-ul-Haq who claimed four for 14 from his allotted four overs.

Another 20-year-old, Guyanese off-spinner Kevin Sinclair in only his second ever T20, also proved superb with two for 13 from four overs while new-ball partner – captain Chris Green – conceded just three runs from his four overs of off-spin.

Tridents, who last weekend failed to chase down 93 against St Lucia Zouks, could not repeat the Zouks’ heroics as Amazon Warriors reached their target with 20 balls left in the innings.

They lost Sinclair (3) and Shimron Hetmyer (9) cheaply to slip to 35 for two in the seventh over but Brandon King, with 60 runs from his seven previous innings in the tournament, tasting form with an unbeaten 51.

He struck four fours and two sixes off 49 balls, posting 58 in an unbroken third wicket stand with Nicholas Pooran who was unbeaten on 18 at the end.

With the defeat, Tridents now lie fifth on four points and with only two games remaining, can only finish the preliminaries on a maximum eight points.

Amazon Warriors meanwhile took a giant step towards securing a semi-final spot and are now third on eight points with two games remaining.

Opting to bat first, Tridents lost Justin Greaves – in his first match of the tournament – for a first-ball ‘duck’ to the fifth ball of the match when he missed a sweep at Green and was hit in front with a single run on the board.

In the next over, Johnson Charles holed out off Sinclair without scoring to a brilliant running catch on the ropes at long on by Hetmyer and when indecision over a second run resulted in the run out of captain Jason Holder without scoring, Tridents were three down for three runs.

The carnage continued when Shai Hope drove a high return catch to Sinclair in the fourth over for five and Jonathan Carter (5) and Kyle Mayers (10) both perished in the 10th over from Naveen.

Carter was run out at the non-striker’s end after being sent back by Mayers in another mix-up this time over a non-existent single while Mayers eventually top-edged a pull and was taken by wicketkeeper Pooran running back.

When Ashley Nurse and Raymon Reifer both fell in the 12th over to Naveen, the Tridents were facing the ignominy of eclipsing the lowest-ever CPL total – 52 by Trinidad in 2013 – but Santner spared them blushes, striking a four and two sixes in a 48-run, ninth wicket partnership with Rashid Khan (19).