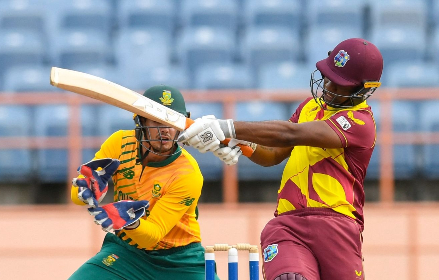 West Indies selectors have stuck with the same 13-man squad for Tuesday’s third Twenty20 International against South Africa in Grenada.

The sides split the opening two games at the Grenada National Stadium, West Indies winning the opener by eight wickets last Saturday and South Africa responding with a 16-run win in the second game on Sunday.

And chief selector Roger Harper said the upcoming game provided players with another chance to impress as a collective.

“The selection panel is happy to retain the same squad for the third CG Insurance T20I,” Harper said.

“With this series in the balance, we would like to give this squad another opportunity to display how well they can play together.

“We are aware that there are still a number of T20Is ahead so there will be opportunities for other players going forward.”

As a result, no room has been found for attacking left-hander Shimron Hetmyer who has been fit and training with the group but unable to break into the squad.

The script was quite different in the second match, however, as only Fletcher and all-rounder Fabian Allen displayed any real enterprise with the bat.

Left-arm seamer Obed McCoy was good for a three-wicket haul while off-spinner Kevin Sinclair was once again entrusted with the new ball and picked up two wickets in a four-over spell that cost only 23 runs.

The fourth T20I is set for Thursday with the final game on Saturday.