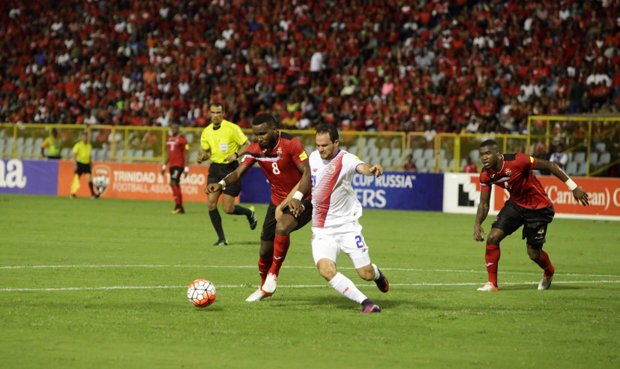 Trinidad and Tobago’s dismal World Cup CONCACAF qualification run continued on Tuesday when they were beaten 2-1 by hosts Costa Rica at the Estadio National.

The result gave the Costa Ricans sole possession of second place on 11 points, three behind Mexico (14) and three ahead of the United States (8). T&T remains in last place on three points, losing for a third consecutive match.

Francisco Calvo gave the hosts a 1-0 lead in just the first minute, when he headed home from the edge of the six-yard box off Joel Campbell’s in-swinging corner kick from the right.

The Trinidadians leveled in the 35th minute as Joevin Jones rolled a pass from the left across the top of the penalty area to Kevin Molino, who took a touch before slapping a left-footed effort from 20-yards out that beat a diving goalkeeper Keylor Navas.

In the 44th minute, a moment of brilliance from Bryan Ruiz proved to be the difference. The 2016 CONCACAF Player of the Year received a pass from Marco Ureña, eluded a defender and then – from the top-left side of the 18-yard box, sent an effort with the outside of his left foot past diving goalkeeper Jan-Michael Williams and into the right side of the net.