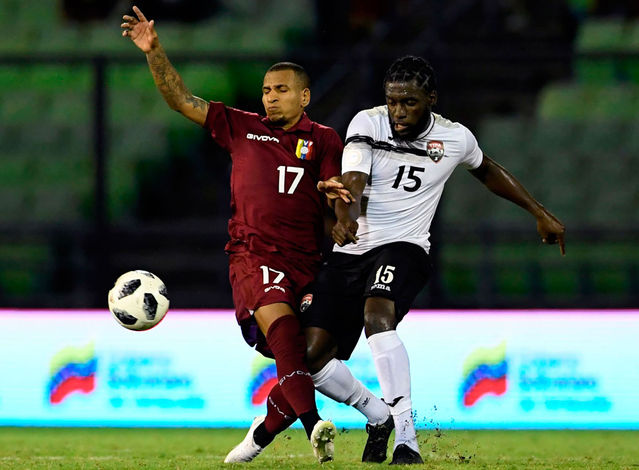 CARACAS, Venezuela, CMC – Trinidad and Tobago’s wretched winless run rumbled on Monday night when they crashed to a 2-0 defeat to Venezuela in an international friendly.

Salomon Rondon’s 11th minute strike and Darwin Machis’s goal three minutes later was enough to snuff the life out of the visitors and extend their streak to 14 matches on the trot without a single win.

T&T were forced on the defensive from early in the encounter as Venezuela pressed, and it appeared only a matter of time before the hosts got on the scoresheet.

And the opening goal came via a patient buildup in midfield before the ball was spread out wide to Machis whose cross eluded goalkeeper Adrian Foncette and fell to Rondon who poked home from close range.

Dennis Lawrence’s side suffered another blow soon afterwards when a long ball out of the back found Machis on the left flank, the Spain-based striker cutting in before producing a low 23-yard drive which Foncette should have done better to save.

Foncette then brought off a low save to deny Rómulo Otero in the 20th minute and keep the scoreline intact.

T&T, however, had three golden opportunities to get back into the game just minutes before the break but Levi Garcia failed to get onto the end of a low right-sided cross into the box and Marcus Joseph’s resulting shot was parried by goalkeeper Wuilker Faríñez.

Garcia’s deflected free-kick from 25 yards out then forced a fingertip save from Faríñez.

On resumption, Ataulla Guerra shot wide in the 59th minute and three minutes later Foncette was called into action to keep out another attempt on goal from Otero.

T&T finished the game on the ropes with Foncette making another couple of saves to preserve the scoreline.