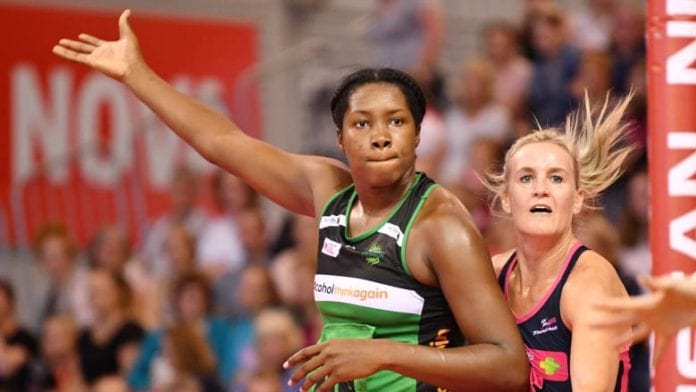 Down 33-41 during the interval at the University of Sunshine Coast Stadium here, Swifts conjured up a massive third quarter thanks to sustained scoring from Helen Housby and Sophie Garbin to outscore Fever 27-11 and command a 60-52 lead at the start of the final quarter.

Fowler-Reid, the veteran 31-year-old Sunshine Girl, then inspired a final Fever surge down the stretch which saw them level the scores at 72 in the final minute when Alice Teague-Neeld netted a critical goal.

However, Housby had the final say, sinking the final goal of the contest to hand Swifts their second straight win of the new season while condemning Fever to their first defeat.

Swifts were indebted to Garbin who led their attack with 28 from 32 attempts while Housby shot 19 from 25 and Trinidadian Samantha Wallace, 18 from 25 attempts.

For the losers, Fowler-Reid spearheaded Fever’s attack with 53 goals from 57 attempts while Teague-Neeld chipped in with 11 from 16.

Fowler scored 13 goals in the first quarter but Wallace countered with 12, as Fever could only eke out a two-point lead – 20-18 – at the end of the first period.

However, Fowler then produced an even bigger effort in the second quarter with 18 goals while Wallace answered with only eight, as Fever finally managed to create breathing room for themselves at the half.

But the game opened up in the third quarter as Garbin exploded with a 21-goal effort and with Fowler limited to only 10, Swifts came roaring back into the contest.

At the same venue, Jamaican Shimona Nelson launched her season in style scoring 32 from 37 attempts but the performance was not enough to prevent Sunshine Coast Lightning from a 51-47 win over the Collingwood Magpies.

Cara Koenen shot 38 from 45 to lead Lightning to their second win of the season.

On Saturday night at Nissan Arena in Brisbane, there was also disappointment for Jamaican Romelda Aiken whose Queensland Firebirds suffered a 50-78 blowout at the hands of Melbourne Vixens, despite her 35 from 43 attempts.

Mwai Kumwenda and Tegan Phillip both netted 23 goals while Caitlin Thwaites finished with 19 from 24 attempts for the winners.

In the other game at the venue, Jamaican goal-keeper Shamera Sterling’s Adelaide Thunderbirds overcame a sluggish start to beat Giants Netball 59-51 and claim their first win of the campaign.