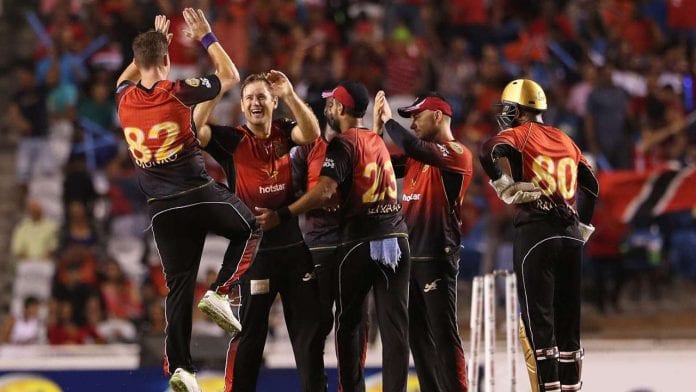 PORT OF SPAIN, Trinidad, CMC – Two-time reigning champions Trinbago Knight Riders made a successful start to the defense of their Caribbean Premier League title on Wednesday night, when they beat St Kitts and Nevis Patriots by 11 runs at Queen’s Park Oval.

Slumping on 20 for three in the fourth over after being sent in, TKR recovered to reach 152 for seven off their 20 overs, thanks to captain Kieron Pollard’s top score of 47 and 33 apiece from Denesh Ramdin and New Zealander Jimmy Neesham.

In reply, Patriots looked in the hunt at 70 for one but seamer Neesham (3-18) and Pakistani new-ball pacer Mohammad Hasnain (3-36) snatched three wickets each to restrict them to 141 all out with two balls left.

TKR looked in early trouble when left-arm seamer Sheldon Cottrell (3-13) removed Sunil Narine’s middle stump without scoring with the fifth ball of the match, and then also shattered Tion Webster’s stumps in his next over for six with 11 runs on the board.

And when Lendl Simmons played on to fast bowler Alzarri Joseph for 11, Patriots boasted all the momentum.

However, the recovery started through Neeshan and Ramdin who put on 60 for the fourth, before Ramdin added a further 54 for the fifth wicket with Pollard.

Neesham lashed three fours and a six off 30 balls before holing out to long-off off pacer Rayad Emrit in the 12th over and Ramdin’s innings was ended when he skied Cottrell to deep square, after hitting a four and two sixes off 32 deliveries.

Pollard, in at number six, slammed four fours and three sixes in a 32-ball knock, as his side gathered 51 runs from the last five overs.

He was out to the fourth ball of the final over, caught at cover off Emrit who finished with three for 39.

Patriots were then given a handy start when left-hander Evin Lewis (36) and fellow Trinidadian Kjorn Ottley (25) posted 47 off 44 balls for the first wicket.

Neesham had Ottley caught and bowled in the eighth over but Lewis, who belted two fours and three sixes in a 27-ball stay, added a further 23 for the second wicket.

Once Lewis picked out Neesham at long-off with left-arm spinner Khary Pierre in the 11th over, the Patriots innings unraveled as four wickets tumbling for six runs in the space of 17 deliveries.

Tottering on 76 for five in the 14th over, Patriots were given a glimmer of hope when Fabian Allen smashed four sixes in a 14-ball 30, in a 36-run sixth-wicket stand with Usama Mir whose 24 came from just 10 balls and contained a pair of fours and sixes.

The game was still open with 21 required from the last two overs but Hasnain conceded just eight from the penultimate over before Man-of-the-Match Neesham grabbed two wickets in the last, to seal the result for TKR.