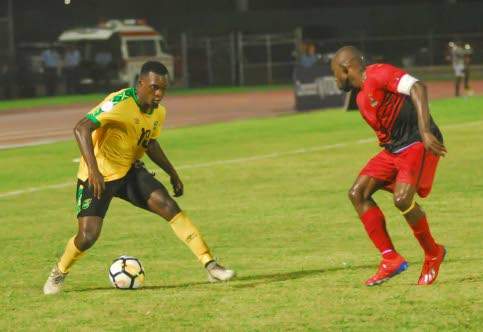 GEORGETOWN, Guyana – Jamaica’s Reggae Boyz picked up a 4-0 away win over Guyana in Group C of League B action in the Concacaf Nations League at the Leonora National Track & Field Center in Guyana.

Playing in League B, Jamaica beat the hosts 4-0 at the Synthetic Track and Field Facility in Leonora with Alvas Powell and Dever Orgill netting braces while in League A, T&T were held 2-2 by the French Caribbean side in a contest at the Ato Boldon Stadium in Trinidad.

For Jamaica, the victory was their second in four days following their 6-0 drubbing of Antigua and Barbuda in Montego Bay last Friday.

T&T, meanwhile, suffered their second straight stalemate with Martinique, on the backs of the 1-1 result last Friday in Fort-de-France.

Jamaica were handed a swift start when Powell capitalised on shambolic Guyana defending to open the scoring in the 14th minute before doubling the advantage in the 26th minute.

And the visitors added a third on the stroke of half-time when Orgill, teed up by Shamar Nicholson, scored his first from eight yards after Guyana’s defence failed to clear their lines properly.

After the break, it was more one-way traffic and Jamaica were rewarded in the 54th minute when Nicholson struck the uprights with a low drive and Orgill volleyed in the rebound from six yards.

In Couva, T&T appeared en route to a much-needed victory when Alvin Jones’s long-range blast beat goalkeeper Loic Chauvet in the 17th minute, to give the hosts a 1-0 lead at half-time.

And when Canada-born winger Ryan Telfer scrambled home the second goal a minute after the resumption, T&T were in control of the game.

However, Martinique launched their comeback when Trinidad and Tobago’s Daniel Carr put the ball in the back of his own net and it was completed in the 80th minute when Jordy Delem knocked in the equaliser from close range.

Elsewhere in League B on Monday, Antigua notched a 2-1 victory over Aruba at the Vivian Richards Cricket Ground.

On Saturday in Belmopan, Grenada edged Belize 2-1 thanks to an injury-time strike from Honduras-based Jamal Charles while in Basseterre, England-born Rowan Liburd scored 15 minutes from the end to earn hosts St Kitts and Nevis a 2-2 draw with French Guiana.

St Vincent and the Grenadines also registered victory when they beat Dominica 1-0 at Arnos Vale.