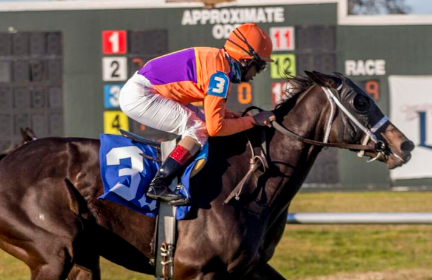 Racing off the pace for most of the mile and sixteenth trip, Bridgmohan switched the six-year-old mare to the outside for the stretch run, grabbed the lead inside the furlong marker to reach the wire 1-¼ lengths clear in a time of one minute, 42.66 seconds.

The victory was the seventh in 21 starts for Secret Message, taking her earnings to $564 413.

Trainer Brad Cox afterwards praised Bridgmohan for his handling of the mare.

“We really liked her in her last race. It was definitely disappointing with the outcome of the last race,” Cox said.

“We were hoping we’d get a little better trip today, setup today, and we got both. Shaun did an excellent job of executing the plan and it worked out great.

Up against the four-year-old and upward fillies and mares, Secret Message broke from the inside but was forced back along the rails to trail the field as 3-1 chance Jeanie B pulled produced fractions of 23.57 seconds for the quarter and 48.34 for the half, with favourite Dalika glued to her flank.

Twenty-to-one outsider Curlin’s Journey tracked from third with 12-1 bet Xanthique half-length behind, and Secret Message down in seventh.

Jeanie B, Dalika and Curlin’s Journey brought the field into the stretch in an engaging dispute for the lead before Jeanie B edged ahead.

However, Bridgmohan then brought Secret Message from well off the pace to get up in the dying yards.