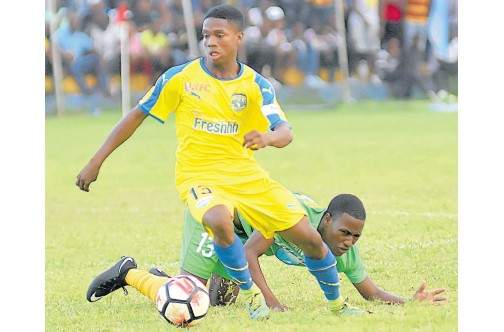 Defending champions Clarendon College was initially granted permission to suit-up the player, who led them to DaCosta Cup and Olivier Shield honors last season, but the decision was later reversed after other schools protested his participation in the competition, because he’s a professional player.

He had already played in one game after returning from what was deemed “an assessment exercise” which lasted for three weeks with the famed Brazilian club, Vasco da Gama.

It is understood that the school decided to appeal ISSA’s ruling because Walker is not now a professional player, but ISSA’s president Keith Wellington stood firm on the decision to disallow professionals from competing in its amateur competitions for secondary schools.

From our vantage point, we are disappointed in Clarendon College’s desperation to have Walker play in this season’s competition, which has now reached the quarter-final stage.

Where are their morals? Is it all about the win at all costs and glory for the school? What about what is best for the student/athlete?

Does Clarendon College want the best for Walker, who brought titles to the school over the past few seasons, or are those in charge merely being selfish in their desire to have him bring further glory to the school? What about his future development in the game and how does another season at the lower schoolboy level aid in that development?

The 19-year-old Walker only recently made his debut for Jamaica’s Senior Reggae Boyz, playing in two games against Aruba inside Kingston’s National Stadium, and at Stadion Ergilio Hato in Curacao.

He also netted his first senior goal in the game, scoring the third goal.

But before his recent senior international exploits, Walker represented Jamaica at the Pan American Games in Peru for Under-23 players. There he was a standout in an otherwise ordinary Jamaican team performance, and his talent was spotted, which made for the three-week trial at Brazil’s Vasco da Gama.

He excelled and at the end, the storied Brazilian club was ready to sign him, but unfortunately, time and circumstance conspired against the move. Firstly, according to reports, Vasco had thought that he was an amateur, having just emerged from the schoolboy competition.

In that case, the club would have signed him as an amateur outside the official FIFA transfer window, but the deal fell through when it was discovered that he had a standing professional contract with defending two-time Red Stripe Premier League champions Portmore United.

By this, the FIFA transfer window had closed and the possible move to the Brazilian club was delayed.

“Unfortunately, the windows closed and that’s why he did not sign a contract, but we are talking already to see that it happens in January because this boy is a great talent.

“When I saw him training, basically with the ball, I did not see much difference between him and the other players, as he played with the Brazilian style,” added de Oliveira, who led the Jamaican Under-20 team to the FIFA World Cup Finals in Argentina in 2001.

“He can make a difference because of his skill, his speed, control of the ball, good reading of the game. Those are the details that Brazilian coach told me about Lamar,” added de Oliveira, who served as technical director of Vasco’s youth department and acted as a technical observer to the senior team.

For Walker, the stint in Brazil was an experience that excited him.

“I missed out on the opportunity to sign with Vasco because the window close, and therefore I have to await the next window. My immediate goal is to represent Portmore in the Premier League and continue to improve my talent until the right opportunity comes,” he told the Jamaica Observer last month.

“I learned a lot from my recent experience as it was a great eye-opener. I now better appreciate what professional football is all about, which is having the right mindset and attitude, and this is a very important part.”

It is our view that another season floating through the lower schoolboy league would not have benefitted Walker as much as his talent and skill set demands. We believe testing himself in the top-tier Premier League, in which he is yet to feature, would accelerate his development much faster.

It’s time that his handlers seriously examine the best long-term plan for this super talent and not let the opportunity go to waste. The Jamaican landscape is replete with such examples.