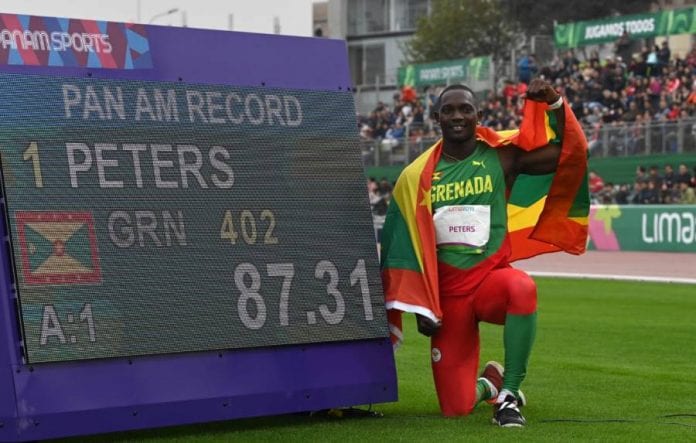 LIMA, Peru, CMC – Grenadian Anderson Peters broke an eight-year-old record as he captured his country’s first-ever gold at the Pan Am Games by winning the men’s javelin on the final day of track and field action here Saturday.

Trinidadian Keshorn Walcott, the 2012 Olympic champion and Pan Am title-holder, finished second with a throw of 83.55m while St Lucian Albert Reynolds clinched bronze with a personal best 82.19.

A second-year student at Mississippi State in the United States, Peters threw his winning mark on his first attempt before following up with impressive throws of 81.78m, 78.92m, 85.90m and 81.21m.

The two-time reigning NCAA Division One champion is now fifth in the world this year and will now target the World Championships this October in Doha.

The gold was one of two on the day for the Caribbean as 29-year-old Barbadian Shane Brathwaite won the men’s sprint hurdles in a season-best 13.31 seconds, narrowly out-leaning American Freddie Crittenden III at the line.

Running out of lane seven, Brathwaite dueled with Crittenden, in lane six, throughout the contest, before getting the best of his rival.

In the process, Thomas-Dodd smashed the 36-year-old championship record of 19.34m set by Cuba’s María Elena Sarría at the 1983 Venezuela games.

There were also silver medals for Jamaica in the women’s 1500 metres where Aisha Praught (4:08.26) followed home winner American Dominique Hiltz (4:07.14), and in the women’s triple jump where Shanieka Ricketts measured a personal best 14.77 metres to finish behind Venezuela’s Yulimar Rojas (15.11) – a new championship record.