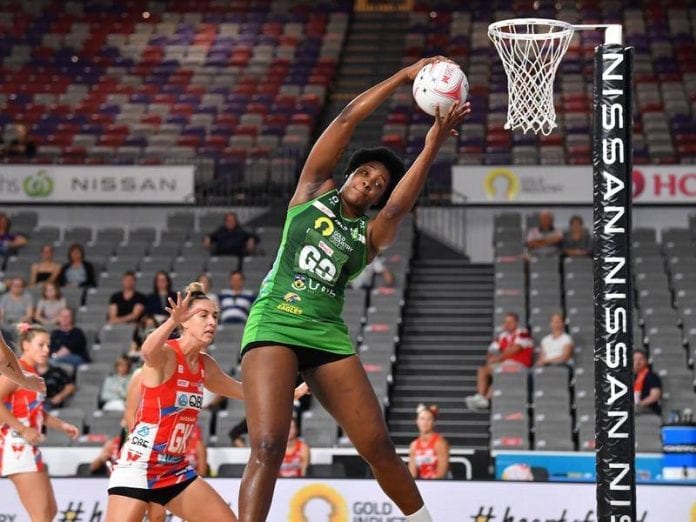 Sunshine Girl Jhaniele Fowler-Reid tasted disappointment for the second time in three years when her West Coast Fever suffered an agonising 64-62 defeat to Melbourne Vixens in the final of the Australian Super Netball Championship last weekend.

Playing at the Nissan Arena, Fever held a slim one-goal lead at half-time but they let things slip in the third quarter and failed to recover.

Fowler-Reid was brilliant, scoring 54 goals from 55 attempts but her efforts came to nothing as veteran Malawian shooter Mwai Kumwenda answered with 47 goals from 50 attempts for Vixens to earn the Player-of-the-Match honour.

Her performance was reinforced by Caitlin Thwaites who was a perfect ten-from-ten and together they combined to get the better of Fever.

Hoping to erase the bitter memories of Fever’s loss in 2018, Fowler-Reid produced a strong first quarter, scoring 14 goals to propel Fever to a 16-15 lead at the end of the period.

And while she scored another 14 in the second quarter, Kumwenda netted 12 and Thwaites, five, to keep the game close at 33-32 to Fever.

The third quarter proved pivotal, however. Kumwenda scored 15 and got support from Thwaites and Tegan Philip, while the defence of Emily Mannix, Jo Weston and Kate Eddy forced several turnovers which were converted.

Fowler-Reid kept Fever in the contest with her impeccable shooting but despite her excellence, Vixens led 50-47 at the end of the penultimate quarter.

Fever needed a massive final quarter but even though they outscored their opponents 17-16, it was not enough to erase the deficit.