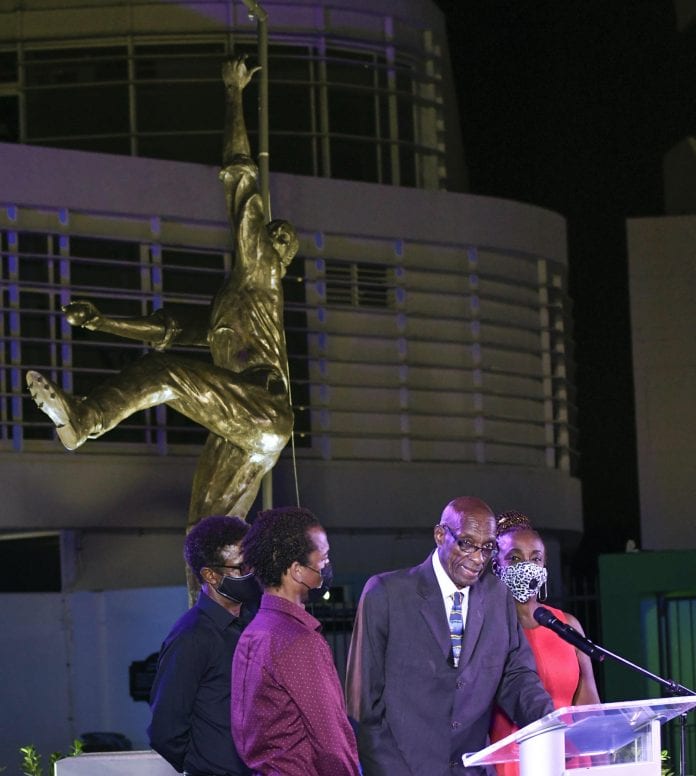 Former Barbados and West Indies fast bowler, Sir Wes Hall said he was touched by the gesture to erect a statue of his likeness outside of Kensington Oval in Barbados.

On Sunday, the eve of Barbados’ 54th anniversary of political independence from Britain, Sir Wes and Prime Minister, Mia Mottley cut the string in front of an audience of around 200 to unveil the eight-foot bronze statue, which was crafted by local sculptor, Jason Hope.

The statue of Sir Wes, which captures him in delivery stride, is located adjacent to a statue of his former Barbados and West Indies captain, Sir Garfield Sobers outside the north-eastern entrance of the venue.

“I really appreciate those Barbadians who (came) on board and made sure that this statue (is) here for all Barbadians to see, and we did not have to go to India, Australia or England to get the funds,” Sir Wes told an audience that included several former Barbados and West Indies players.

“I (want) you to recognise these Barbadians have come to the party and this is the reason why we have this statue, and I am very happy. I am very humbled.”

Sir Wes, 83, who now walks with a cane, was joined by his daughter, Dr. Kerry Hall and two sons, Sean and Remi, during a near half-hour long speech.

“I do not really know very much about statues,” Sir Wes told the gathering that also included Cabinet ministers, dignitaries, family and friends.

“People like me…we learn to dream big, yes, and to achieve some accolades and trophies, but we do not dream about statues. These things were out of our reach.

“When ordinary people do extraordinary things that are worthy of emulation and are received by the people of their country, then they will have material for young men and women to know that they too can write their names on history’s page.”

Following his cricket career, Sir Wes served in many capacities in West Indies cricket, including selectors and team manager, and culminating with his rise to the position of president from 2001 to 2003.

He also was a minister of government before becoming a minister of the gospel in the Pentecostal faith and was knighted for his service to sport and the community eight years ago.

Prime Minister Mottley said there was much to emulate from the life of Sir Wes.

“I want on behalf of the government and people of Barbados…to salute you and to say to all of the others who helped to create that moment, that we will do all in our power as a government to continue to ensure that you will not only be honoured, but that the (cricket) legends of Barbados will not just remain a cricket legacy,” she said.

“We must merge the legacy of the (cricket) legends with the current requirement of what we must do to earn.”