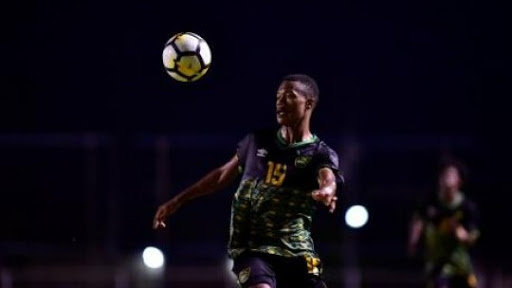 Former Young Reggae Boy Deshane Beckford netted his first goal for Colorado Springs Switchbacks as they came from behind to thrash Tacoma Defiance 4-2 in the United Soccer League at mid-week.

The 23-year-old, signed on loan from Jamaican Premier League club Montego Bay United back in April, was on target in the first half to double the Switchbacks’ lead, after they went behind as early as the 11th minute through a Marlon Vargas strike.

Guinean international Hadji Barry, who provided three assists on the night, scored in the 80th to stretch his side’s lead to 3-1 and even though Alec Diaz pulled one back five minutes later, Congolese international Michee Ngalina added a fourth and his second of the game for Colorado in the 89th minute.

The victory was the first for Colorado at the new Weidner Field and only their second of the new season, keeping them one from bottom in the Mountain Division on eight points.

Vargas opened the scoring when he capitalised on poor defending to score from close range but Ngalina equalised with a terrific lob from 22-yards after being released by Barry.

Beckford, who featured for Jamaica Under-23s at the 2019 Pan American Games, then gave the hosts the lead in the 36th minute, arriving at the far post to finish off a clinical move which started out on the right when full back Sebastian Anderson squared for Barry who then provided the assist.

Up 2-1 at the half, Colorado were forced to wait until 10 minutes from time for their third goal when Barry completed a flowing move.

Some nervousness was created when Diaz rounded the ’keeper and scored the visitors’ second but Ngalina’s solo run down the left killed the game off.

Another Jamaican Rojay Smith scored his second of the season and provided an assist but Sporting Kansas City II crashed to a 4-3 defeat to hosts FC Tulsa at Oneok Field.

The 24-year-old Smith opened the scoring in the seventh minute when Tulsa lost the ball just outside the 18-yard box and the former Harbour View player calmly beat the ’keeper to his left with a low, left-footed drive.

However, the hosts responded emphatically when Rodrigo da Costa and Marlon both scored in the last four minutes before the break, before Dario Suarez added a third from the spot in the 62nd after being brought down by Kayden Pierre.

When Joaquin Rivas added the fourth in the 72nd minute, the game appeared done and dusted but Smith set up the first of Tyler Freeman’s two late strikes, to make things interesting at the end.

Tulsa’s win broke a three-game losing streak and left them third on 12 points in the Central Division while the defeat for Sporting was their first in four games but their fourth in nine outings, leaving them one from bottom on seven points.

The 30-year-old scored from the penalty spot in the 69th but a first half brace from Jeremy Rafanello, along with a 62nd strike from Roald Mitchell, had already put the hosts in control of the encounter.

At AutoZone Park in Memphis, Trinidad and Tobago international Ajani Fortune was sent off in the 36th minute for a second yellow card as his Atlanta United 2 suffered a 1-0 defeat at the hands of Memphis 901 FC.