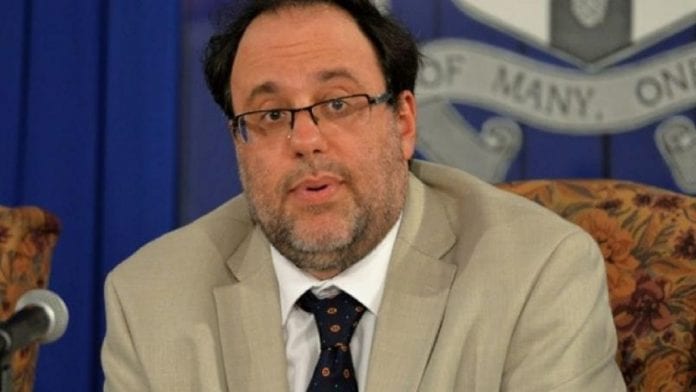 Ahead of the People’s National Party’s (PNP) internal elections scheduled for November 7, presidential hopeful Mark Golding is now emerging as the stronger of the two candidates.

While his opponent Lisa Hanna is still the most popular candidate, many comrades believe that Golding has more experience in politics, a better track record, and more leadership qualities. Even Hanna’s own councilor in her South East St. Ann constituency, Lydia Richard, indicated she will be supporting Mark Golding for the presidency of the party.

One of Golding’s few downfalls in the presidential race is that many Jamaicans do not know or connect to him in the same way that they do Lisa Hanna—who had established herself as a public figure long before her political career. But since the island’s election debates, where Golding shone against Minister of Finance Nigel Clarke, more and more Jamaicans have been curious about the man who could possibly emerge as the next PNP president.

Mark Golding was born in 1965 in Kingston—the second child and the only son of Dr. Sir John Golding and Lady Patricia Golding. His father, Sir John, served as a doctor for British forces in WWII and moved to Jamaica in 1953, after originally intending to pay a short visit, where he was instrumental in ending the island’s polio epidemic. Sir John went on to found the Mona Rehabilitation Centre (renamed the Sir John Golding Centre), a charity foundation for people with physical disabilities, while his wife dedicated years to public service.

Golding has said he grew up on the UWI Mona campus, where his father had worked; and being around some of the most powerful liberal minds at that time helped him to develop a “progressive orientation.” Golding was educated at Mona Prep and later Campion College, where he excelled in academics as well as cricket.

Golding did not graduate from Campion, rather he finished his secondary education at his father’s old boarding school, Marlborough College, in England. During his time in England, he also read for his Bachelor of Law degree at Oxford University.

After he returned to Jamaica, he studied at the Norman Manley Law School and soon after, got a scholarship overseas to pursue his master’s degree in law (LLM) in commercial and corporate law at University College London.

Golding was called to the bar in 1990 and joined the prestigious Hart Muirhead Fatta Law firm where he has operated ever since. In 1993, he co-founded Dehring, Bunting & Golding (DB&G) Limited, Jamaica’s first private sector investment bank. His partners were his schoolmates at Campion College, Chris Dehring and Peter Bunting, the PNP stalwart who lost his parliamentary seat in the September general elections.

Golding’s legal expertise played a vital role in DB&G becoming one of the leading financial institutions in the Caribbean. Over the course of his career, he also served as a director at GraceKennedy Limited Caribbean Information, Credit Rating Services Limited, and the Bank of Nova Scotia under Scotia Limited. Golding is also the chairman of the Mona Rehabilitation Foundation and of Arnett Gardens Football Club, which keeps him connected to his love of football.

In 2006, Golding and his partners sold DB&G to Scotiabank and Golding launched into the next phase of his career—politics.

Golding was appointed to the Senate of Jamaica in 2007 by former PNP leader and Prime Minister Portia Simpson-Miller. After the PNP won the general election in 2011, he was named minister of justice. He was also named chairman of the Legislation Committee of Cabinet. The year prior, in 2010, Golding had co-founded Proven Investment Limited, a publicly listed investment company.

During this four-year term in parliament, 121 Acts of Parliament were passed under Golding’s stewardship. Most notably, Golding was the pioneer behind the island-wide decriminalization of marijuana, which earned him significant praise from international organizations.

In 2017, Golding was elected to Parliament as the representative for South St. Andrew, replacing PNP veteran Omar Davies who had retired that year.

In 2019, Golding became a key ally of his friend Peter Bunting who had challenged Peter Phillips for the leadership of the party. But this year, following the PNP’s election defeat, Golding has decided it is his time to put up his own challenge.

Golding has an older sister, who lives in Trinidad. He has been married to his wife, Sandra, since 1990. They have three children, two girls and one boy, who are all in Jamaica. Golding is an avid fan of cricket and football, having played both as a schoolboy. He was a musician throughout his time at Oxford University and was the co-owner of a music label in the late 1990s. Golding enjoys dancehall music, a quiet domestic life, mostly abstains from alcohol, and is a pescatarian—focuses on a diet of seafood.