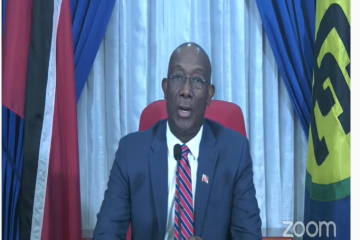 Trinidad and Tobago publicly thanked African countries for their support in helping the Caribbean Community (CARICOM) region access vaccines to deal with COVID-19 and urged closer collaboration into the future.

Prime Minister Dr. Keith Rowley, addressing the inaugural Africa-CARICOM summit held virtually on Tuesday, said that he can attest to the close cooperation of the African countries during his tenure as chairman of the regional grouping earlier this year, when accessing vaccines from the developed world had become major issue.

“As COVID-19 ravaged the social and economic fabric of our nations, CARICOM prioritized the early sourcing of COVID-19 vaccines to inoculate as many people as possible before additional threats, such as new variants, presented themselves.  The prevailing vaccine inequity, commonly called vaccine apartheid, stymied that plan.”

Rowley paid tribute and “sincere gratitude”  to South African President, Cyril Ramaphosa, as well as President Uhuru Kenyatta of Kenya and President Nana Addo Akufo-Addo of Ghana, “for the meaningful discussions and interventions during my tenure and the pragmatic solutions arrived at in the face of this global health crisis.

“Thankfully, last month, CARICOM began to receive a substantial allocation of vaccines under the African Medical Supplies Platform,” he said, adding that Trinidad and Tobago had received its first tranche in August.

Rowley said that Trinidad and Tobago’s linkages to Africa run deep as marked by the bilateral relationships, observer status at the African Union (AU), High Commissions in Nigeria and South Africa and Honorary Consuls in Ghana and Kenya.

“Soon, we too will avail ourselves of the magnanimous gesture of the Government of Kenya to provide office space for CARICOM’s diplomatic presence in Africa – a tangible manifestation of the commitment to engage Africa’s 6th Region as reflected in your blueprint for development – Vision 2063.”

He said that today’s high-level engagement between CARICOM and Africa is a historic one and that it is fitting that this first summit is being held during the United Nations’ International Decade for People of African Descent.

“We must also acknowledge, apart from our centuries-old ties, the many African and Caribbean architects/champions of closer political, social, economic and cultural linkages between and among our sovereign states.”

Rowley said that closer collaboration will undoubtedly be to the mutual benefit of both regions whether it be in pursuing development finance, resource utilization or debt sustainability.

“We look forward therefore to a meaningful outcome in Glasgow at COP26 working alongside our global partners.”

Rowley said that there is also scope for collaboration in the creative sector which has been particularly hard hit by the pandemic. Africa and the Caribbean have gifted the world with exceptional talent be it in music, publishing, film or fashion.

“Let us strengthen the links between our region’s creative industries, a sector described by the United Nations Educational, Scientific and Cultural Organisation (UNESCO) as having the capacity to be “drivers of cultural, economic and social outputs for sustainable development,” he added.