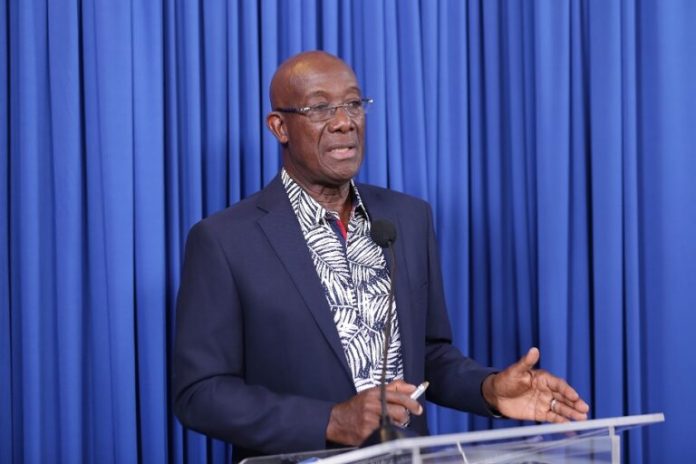 Trinidad and Tobago Prime Minister Dr. Keith Rowley brushed aside efforts by the Opposition Leader Kamla Persad Bissessar to remove President Paula Mae Weekes from office, announcing also that over a year ago he had written to the Police Service Commission (PSC) indicating that he had lost confidence in then-Police Commissioner Gary Griffith.

“What exactly has the President of Trinidad and Tobago done that warrants impeachment? I am not here talking about a story in the newspapers about who visits whom, what might have been said, if it was so, it seems so, or I think so.

“I am here talking to the population to tell me specifically what do you know that the President of Trinidad and Tobago has done that requires impeachment,” Rowley told a news conference, adding that he is aware of the requirements being made for him to resign because it “is an ongoing requirement where the Opposition Leader is concerned.

“So let’s impeach the President. She and her 19 imps, pimps and chimps, they put their name on a list and will come to the Parliament and debate the conduct of the President. It is for good reason that our Constitution says that the action of the President cannot be queried in a court of law because they want to save us from ourselves.

‘But the Opposition Leader wants to get around that by bringing the President’s name into the Parliament in a substantive motion so that she and her imps, pimps and chimps can scandalise the President in the worst way,” Rowley said, telling reporters that the ruling People’s National Movement “we will have none of it.

‘She has no idea what the Constitution says. Walking around this country self-appointed Senior Counsel talking about going to debate. Debate what. She doesn’t even know the Constitution, but she probably think she sees an opportunity to scandalize the President in the Parliament…”

On Friday, Persad Bissessar told reporters that she had filed a motion in the Parliament for the establishment of a tribunal to investigate the removal of President Paula Mae-Weekes.

Persad Bissessar said that the motion had the backing of all of her other 18 opposition legislators and that the move was in keeping with her commitment to “use all the powers available to me under the constitution to hold those in office accountable.

The Opposition Leader, who has been calling for the resignation of the Head of State, in the wake of the imbroglio surrounding the appointment of a police commissioner, said that the motion gives four reasons why the President should be removed from office.

She claims that President Weekes, who has not made any public statement regarding the controversy surrounding the appointment of a new police commissioner, including the resignation of the entire membership of the Police Service Commission (PSC) “behaved in such a way as to bring her office into hatred, ridicule, or contempt by interfering and/or facilitating interference with the PSC and by proceeding in the circumstances to appoint new members of the PSC”.

“This is an unprecedented move as no such procedure was ever triggered in the history of our country since Independence. It is my view that this motion is warranted having regard for the circumstances in the public domain. “

The Opposition Leader said that the Office of President of the Republic of Trinidad and Tobago sits at the very top of Trinidad and Tobago’s constitutional structure and that “the person occupying it, was supposed to embody our collective pride as a nation, our collective hopes for a society described in the Preamble of our Constitution which there is fairness, equal opportunity and most of all, a society based on the Rule of Law – where no one is above the Law and the Law is applied equally.

She said that the tribunal should hear from the President, Prime Minister Dr. Keith Rowley and the Attorney General, Faris Al Rawi “as witnesses…to provide answers for the unprecedented calamitous collapse of the PSC and the interference in the process for the appointment of a COP”.

Rowley told reporters Saturday that he has observed “particularly from some persons who believe that their opinion is greater than other people’s opinion in this country and rather than be responsible and provide professional guidance to the population, general mischief-making seems to be where they are located.

“The population has been disturbed for the last two or three weeks on this question of breach of separation of powers. I have addressed this matter before without going into much detail that this question of independence, when you talk about this independent commission…for the man in the street…that independence has in it even in law, a certain element of interaction.

“There is no public entity that is cloistered to independence. I see people asking they want to know if the Prime Minister went to the President House and until the country knows that we will not know if our democracy has been breached and our democratic future is in peril and so on. Absolute hogwash,” Rowley said, reminding reporters that as Prime Minister he has communicate with “the Office of the President by law.

“I speak to the President on the phone and if there is a situation I think in my judgement that the President should know, I am duty-bound under law to do that,” he said, adding “in so far as to what goes on between the Prime Minister’s office and the President’s office a lot of that for good order in this country is in secret and remains in secret until either of these officers deem it fit to tell the population what the conversation is”.

Regarding his statement that he had lost confidence in Griffith as Police Commissioner, Rowley told reporters that he had written to the PSC on three occasions regarding the top cop.

Rowley later refused to discuss the situation regarding Griffith with reporters, saying insisting he was acting within his remit as Prime Minister.