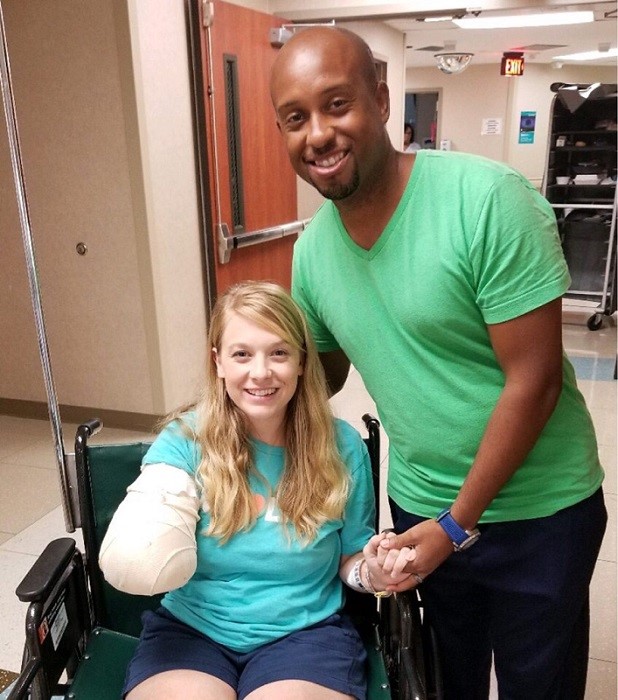 An American woman lost part of her right arm after a huge shark attacked her in the Bahamas.

The woman was snorkeling in waters near Athol Island around noon on June 2 when the attack took place. She was transported to shore and taken to hospital where she was admitted in serious condition. She is scheduled for surgery on Friday in preparation for the fitting of a prosthetic arm

North Carolina residents Tiffany and James Johnson were reportedly enjoying the last stop of their cruise vacation when the mother of three encountered the shark while snorkelling in a shallow reef.

“I wasn’t in pain, it just felt like I had bumped into something so I just casually turned to my right to look to see and that’s when I was face-to-face with the shark,” Tiffany Johnson told WSOC.

She recalled seeing the shark’s mouth clamped onto her right arm. She struggled with the beast for a few minutes before it tore her arm off.

“I kept trying to yank my hand back and the last time I yanked he had cut it clean off so I was able to actually get free,” Johnson told the news station.

Her husband jumped in to help when he heard her scream, and she was helped ashore and rushed to hospital.

Doctors in the Bahamas stopped the bleeding and administered emergency treatment, but her return to the United States was said to have been delayed because of passport and customs issues.