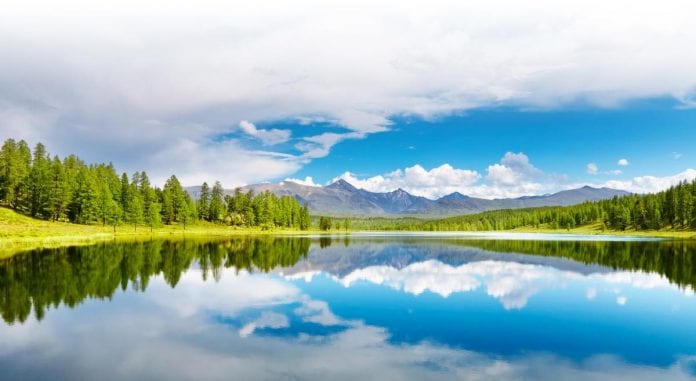 For the first time in 30 years, people living in northern India are able to see the Himalayan mountain range—some for the first time, ever. In Venice, Italy the canals are clear, and species are beginning to flourish. In China, ground zero for the novel coronavirus, the initial lockdown saw pollution levels dropping by 25 percent. And, in New York, the epicenter of the coronavirus outbreak in the U.S., carbon monoxide levels have decreased by 50 percent.

It would have been admirable if these were the results of proactive and strategic measures put in place by governments to course-correct on air pollution and other aspects of climate change. But, alas, these are the effects of lockdowns and stay-at-home orders initiated across the globe to stop the spread of coronavirus. These measures have halted industries, left airplanes grounded, trains stuck in stations, and most cars are sequestered in garages.

While governments and individuals are doing what they can to stem the tide of COVID-19, Mother Nature is catching her breath and reminding us that human actions significantly impact the earth, and reversing those actions or replacing them with more sustainable ones can heal it. As the World Economic Forum puts it, “An invisible virus has made our individual actions more visible than ever—and revealed our true power to face societal crises beyond COVID-19.”

According to the IQAir COVID-19 Air Quality Report of what it described as the “largest-scale experiment ever,” the lockdowns resulted in “unprecedented reductions in deadly particle pollution.” Rome was the lone city in the report that showed an increase (of 30 percent).

Here are the major findings of the report:

In 2019, IQAir’s Air Quality report found that “over 90 percent of the global population breathes dangerously polluted air.” It said that “air pollution continues to pose one of the biggest threats to human health,” which is borne out in the high level of respiratory issues affecting millions of people across the globe.

In the United States alone, “more than 25 million people…have asthma. Approximately 14.8 million adults have been diagnosed with COPD, and approximately 12 million people have not yet been diagnosed,” says a 2020 Respiratory Diseases study by healthypeople.gov. This is devastating news since in addition to the high burden on the healthcare system and the high price tag for health care, having respiratory issues make people more vulnerable and more likely to die if they contract COVID-19—a virus that severely affects the respiratory system.

In fact, studies suggest that areas with high levels of air pollution could increase the risk of dying from COVID-19. Researchers at Columbia University in March calculated that carbon monoxide emissions in New York City, mostly from vehicles, fell by 50 percent—a factor that will greatly improve public health. This reduction is especially important at a time when new research from Harvard T.H. Chan School of Public Health found that air pollution is linked to higher COVID-19 death rates.

How Will We Move Forward?

As reports emerge and visible changes are being recorded in cities such as Venice and Delhi, this accidental model of combating air pollution is unsustainable. Obviously, people will not be confined to their homes forever. They will go back to work which means cars, buses, trains and other modes of transportation will be back in action.  Tourism and business travel will return, which means airplanes will once again take to the skies. Industries will be booming again and the wheels of production will continue turning. As we return to normal, so will the pollution—reversing the gains made during the lockdown. So this honeymoon of sorts will be short-lived. The question is, how can we, in a sustainable way, address these environmental issues which are not just making us sick and more vulnerable but are that is also destroying the earth?

Climate change advocates including scientists, political and religious leaders, as well as climate activists have their ideas. They are hoping that as governments move to rebuild the economies of their respective nations, that they will be driven by cleaner, greener, more sustainable industries and methods.

Included in the lessons coronavirus is teaching us, is that our impact on the earth, individually and collectively, is significant—and the same way in which we have negatively contributed to pollution and climate change, we can have a positive impact in reversing and correcting these problems. The time is now to start thinking about how we can move forward on a global scale. Perhaps moving to cleaner energy sources like wind, solar, and nuclear is the answer. Perhaps it’s individual actions, such as biking, taking the train, or driving hybrid or electric vehicles. Perhaps it’s all of the above.

For the people in northern India who can now see the Himalayan mountain range, or the people in Venice who can see clear canals, this is a testament that cleaning up our earth is possible—if we all work together. This is the challenge for governments, the private sector, and organizations—to rebuild with a focus not just on the bottom line, but also on the people and the planet we live on.