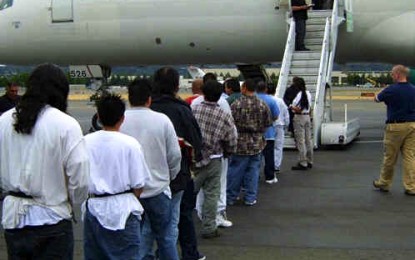 In the midst of all the controversy surrounding Donald Trump and his erupting daily scandals, the Republican held Congress is quietly busy behind the scenes devising legislation based upon Trumps mandate to crack down on Immigrants and reduce overall  immigration.

With most news coverage focused on the Russian investigation and Trumps daily tweets, even controversial legislative efforts aren’t garnering much attention these day, which is the case with several Immigration Bills recently introduced into the House of Representatives.

The Enforcement Act H.R. 2406, Immigration and Customs Enforcement Authorization Act, introduced by Republican Bob Goodlatte and the Davis-Oliver Act, H.R. 2431, introduced by Republican Republican Raul Labrador, while purporting to secure and  protect Americans from dangerous criminal Immigrants and “job stealers”, would among other things, criminalize “unlawful status”, making it a crime to be in the U.S. without current legal immigration status (even overstaying a visa), make drunk driving a deportable offense, and result in deportation of millions of Immigrants. The legislation would further substantially increase both federal and local immigration enforcement, encourage States and local law authorities to act as Immigration enforcement forces, mandate social media vetting for Visa applicants and increase Visa refusals.

You can read the Bills and articles about the proposed legislation by visiting www.Immigratetoday.com and clicking on the Immigration Newsletter link.