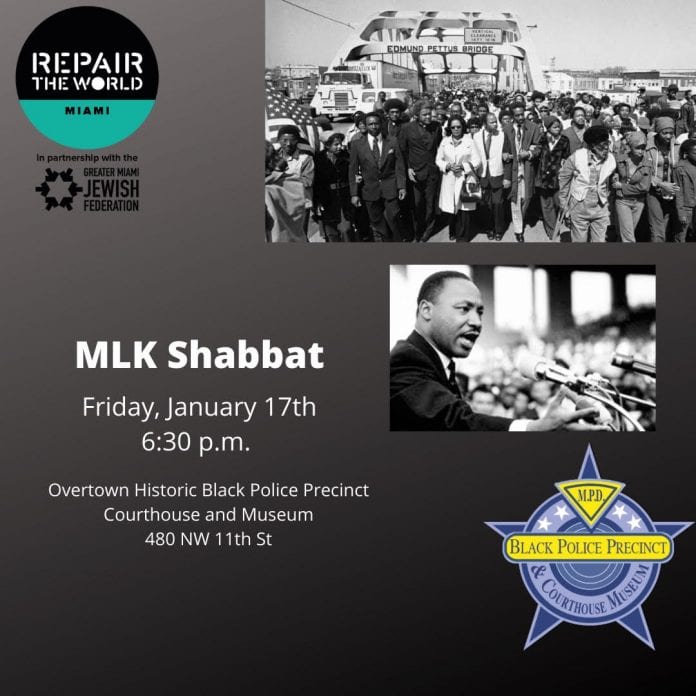 Miami, Florida  – Dr. Martin Luther King upon an invitation to speak at the American Jewish Committee convention in 1958 said this of his Jewish brethren, “Our unity is born of our common struggle for centuries, not only to rid ourselves of bondage but to make oppression of any people by others an impossibility.”  This message sets the tone for what has become decades of blended beliefs and hopes between two communities and will reign supreme at the MLK Shabbat on Friday, January 17 at 6:30 pm at the historic Black Police Precinct and Courthouse Museum in Overtown.  The museum is located at 480 NW 11th Street, Miami, FL 33136.
Repair the World Miami presented by the Greater Miami Jewish Federation has partnered with the Black Police Precinct and Courthouse Museum to produce an event that promotes reunification and love among all people.  “When approached but the Greater Miami Jewish Federation about this event, I immediately saw the opportunity to make a difference during these turbulent times.  In the 1950s during segregation when judges were afraid to cross racial lines to serve black communities, five Jewish judges agreed to serve in our courtroom at great expense to their safety and their families’ safety.  And so today in a small way, we get to return the favor and participate in a movement to repair and reconnect,” says Museum Director Terrance Cribbs-Lorrant.
The Black Police Precinct Courthouse & Museum is 70 years old and has had its share of trials and triumphs.  In 1944, the City of Miami hired and trained five African American Patrolmen to serve the African American communities.  After several years of growth and community service, it was recognized that this new department needed a venue but had to be segregated in accordance with the Jim Crow Laws of the South.  In 1950, famed architect Walter G. DeGarmo built a unique two-story building with a station house on the first floor and courtroom on the second.  The building would go on to be the only one of its kind in the country and house hundreds of officers before closing in 1963 when the two departments integrated.  The venue reopened in 2008 as a museum thanks to the City of Miami Retired Police Benevolent Association.  Lt. Archie McKay, one of the first officers to serve in the building when it was a precinct, remembers, “I would have to stand before all of the judges.  They were tough, but they were fair.  We had a lot of respect for one another.”
Launched in 2017, Repair the World Miami saw an uptick in desire for people to find ways to connect to marginalized populations and connect young Jewish adults to opportunities to serve with their neighbors while connecting to their history and heritage.  MLK Shabbat is one of many events conducted in various communities around Miami.  This is the first event at the museum.
This event is part of the museum’s 2020 Justice For All Series, which will host community conversations and workshops around issues that impact the justice system and communities of color.
The evening events will include a tour of the museum, mingling, the Shabbat Ritual, dinner, and a conversation.  To RSVP, go to dinners.onetable.org.  Tickets are $18.  Or, contact the museum at 305-329-2513.