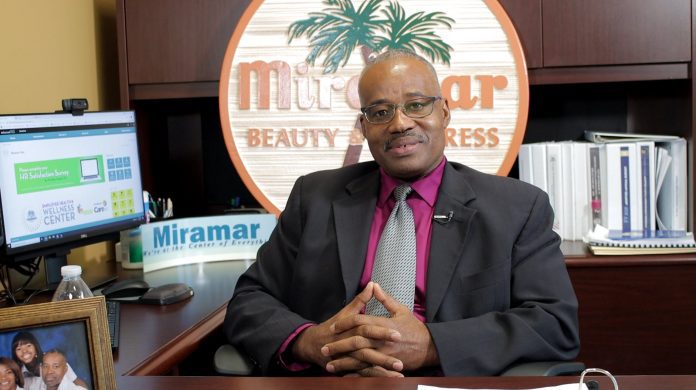 In a little over a month, the city of Miramar will have a new city manager.   On September first, the city’s commissioners approved the appointment of Jamaican Whittingham Gordon, to oversee the daily operations of this 2021 All American city.  Gordon, a 30-year resident and 26-year employee, will succeed Vernon Hargray starting November 6th.   The promotion is one step up from Gordon’s current position as deputy city manager, which he held since 2020.

In an exclusive interview with Caribbean National Weekly, Mr. Gordon said he was “elated” to take up his new task and is ready to work for the people of Miramar.  “It has been a long journey and I think it is a good accomplishment,” a rather soft-spoken and elegantly dressed Gordon said.

“When I first started here in Miramar the population was around forty thousand.  Today we are up to around 140,000.  During those 26 years I have watched the city grow to what it is today.  I have taken part in every aspect of this growth.  I’m involved in every development.  Miramar is my child that I watch grow over the years, and to me it’s everything.”

It is this love for the city and more, why Commissioner Maxwell Chambers thinks Mr. Gordon is fit for the job.  “Driven by the love for his community, he has diligently worked his way up the ladder over the years. This appointment is fitting as it will set a good example for other employees to know that if they work hard, play by the rules, and always do their best, they too can be successful in reaching the top,” he said.

Miramar is the 13th largest city in Florida, the fourth largest and one of the most diverse in Broward County.   Forty percent of the population was born outside the US and it has the largest concentration of Jamaican residents, at 15 percent.  This concentration of Jamaicans makes it the fifth highest in the United States.  The density of Jamaicans is clearly reflected in the makeup of the city commission, where every member has a heritage relating to the Caribbean Island.

Jamaican-born commissioner Alexandra Davis has also lived in Miramar for 30 years, and like her incoming city manager, she has seen the growth, diversity, and influx of Jamaicans.  She said: “It is great to finally have an immigrant from Jamaica to lead [Miramar].”   She emphasized that with “the 5th highest number of Jamaican residents living in the US, having a Jamaican-born City Manager is truly a great achievement.”

Mr. Gordon’s appointment makes him the first Jamaican to become city manager and he is not lost on the significance either.  He was born in Boscobel, St. Mary, about thirty miles east of the resort town of Ocho Rios, Jamaica.  He started his high school at Oracabessa High before migrating to the USA while in the ninth grade.  Sitting in his Miramar office where he looks absolutely at home, he boasts and grins at the opportunity of walking outside his office where within five minutes, he can enjoy a nice plate of jerk chicken or curried goat.

But even though those are two of Jamaica’s favorite dishes, this Jamaican prefers the seafood, conch.  “I love curried conch.  It is my delicious delicacy.  I am from the ocean and most of the guys I grew up with were fishermen.”   His food choice should come as no surprise to those who know him well.  He grew up near the sea and his father was a fisherman also.

The New city manager will start his responsibility with a budget of $323,035,991, managing 1,135 employees and will supervise several departments including water and sewage, public works, police, and fire.   He will also play a pivotal role in the redevelopment of the eastern end of Miramar, as the city continues to grow in population and businesses.  Currently the municipality is the fifth-highest employer in the city, behind giants such as Comcast, Strayer University, Royal Caribbean, and Memorial Hospital.

He’s not new to big responsibilities

Big responsibilities and hard work are not new to the new city manager, however.  He has the experience and the expertise to get the job done.  After being honorably discharged from the US Army, he spent four years working for Miami/Dade County’s water and sewer, building, and zoning departments.  From there he transitioned to Miramar in 1995 where he became the first Jamaican-born Engineering Inspector, a position he held for 13 years.  During his tenure with the Engineering Department, he oversaw land development projects in the height of the construction boom, when Miramar was recognized as the fastest growing city in the county.

His next move was to the utilities department as assistant director, where he instituted many new programs and services.  This is where Mr. Gordon really made a difference for his employer and the people of Miramar.  So much so that his Smart Water Meter project and the Building Energy Management Systems projects won the national Smart 50 Awards, by the Smart City Connect Foundation.   Last month Miramar also won the prestigious 26th Annual Achievement of Excellence in Procurement® (AEP) award for 2021, from the National Procurement Institute.

He beamed with pride as he spoke about these two achievements, of which he is “most proud.”  “Our meter department is now pretty much automated.  We don’t have to send someone out to read a meter anymore.  We just push a button, and everything pops up,” he said with a wide smile that was punctuated with pride.  For a brief time, Gordon also supervised the fire and police departments, in his role as assistant city manager.

These experiences, along with his business administration degree from University of Phoenix, and what he learnt from the army makes him suitable and prepared for the job, he said.  “All these infrastructure and utilities are tied to the growth of the city.  I was able to implement a lot of good things.  To run any organization, you need good leadership skills and discipline.  I got those and more from my 30 years working with two cities and the army,” he maintained.

Mayor of Miramar, Wayne Messam agrees.  “Mr. Gordon has an amazing opportunity to build upon a strong foundation left behind by our retiring City Manager, Mr. Vernon Hargray. He has come up through the ranks working in our Utilities Department and in our city administration for many years. I look forward to working with him as we continue to be a national leader in innovation, serving our residents and business communities.”

Vice Mayor Yvette Colbourne in congratulating Mr. Gordon on his appointment, said his: “26-year long public service career, his work in the Utilities Department and his service as Deputy City Manager has placed him in a unique position to take the lead as the City Manager.  I am confident that he will do a great job.”

The new city manager will need all his experiences and expertise if Miramar is to successfully navigate the current crisis.  Pre-pandemic figures showed a total of 73,444 persons were employed with an average household income of $89,171.  The poverty rate declined by 2.09% to 9.9% in 2019 and purchasing a home could run you an average of $299,900.  Property values went up by 7.5% but almost 70% of homes in the city are owner-occupied.

When will it be over, is one of Gordon’s biggest question and it is also his biggest fear.  “You just don’t know what the unknowns are sometimes.  We are in a pandemic right now.  It is a very tough time for residents and employers.  We have lost some and we don’t know when this is going to be over.  That is the fear in my mind right now.  How are we going to come out on the other side of this pandemic?”

While that question lingers in his mind however, there is no shortage of confidence in his ability to find the answers.  The man who he will succeed, is confident that the commissioners made the right choice.  “Mr. Whittingham Gordon as the new City Manager, has the best team of professionals capable of carrying the work forward. Professional City management matters and we have found that in Mr. Whittingham Gordon, a City Manager with experience, aptitude, integrity, commitment to public service, and one who will work well with the elected leadership.”

What Miramar residents should expect

Despite the apparent negatives from the pandemic, Mr. Gordon still has some rays of optimism.  He assures his residents that they should still have their expectations of a well-run city.

“Well, foremost, a fiscally fit run city, they can guarantee that that is going to happen.  They can also expect transparency and accountability.  We have to be accountable with what we do with taxpayers’ money.  Whatever we do here has to be accepted by the residents.”

One area that residents of Miramar can look for improvement from the new city manager is customer service.    “I want to enhance our customer service from what it is today, making our call center a real call center.  We want to get information out to our residents accurately and as quickly as possible,” he committed.

The city is also looking to expand on the work-live environment at the municipal complex.  Ground has already been broken for the final phase of ‘Manor at Miramar’.  It will include 393 rental apartments and 26,500 square feet of retail space on the eight-story complex, formerly the parking lot in front of city hall.  The project is expected to cost about $110 million.

Mr. Gordon will also have responsibility for the 120 senior affordable housing units on the 2.3 acre former public safety building site.  In the works also is a state-of-the-art soccer training facility on city lands near Everglades High School and Glades Middle School.

A city manager’s job can be stressful and demanding.  Luckily, Mr. Gordon has a long line of believers.  No body in the city government has worked closer and longer with Mr. Gordon than Dr. Roy Virgin.  He believes that the city could not have gotten a better leader at this juncture.

“I have worked closely with him for a about 19 years.  One of the things I admire about him is his diligence, and how meticulous he is when he looks at a project, especially the finances.  This ensures that the city is getting the best bang for its bucks.  He is the epitome of a model employee.  He is very committed, very dedicated, and very knowledgeable.  I cannot think of a better person in terms of someone who has come up through the ranks to get to that level,” he asserted.

Only time will help the residents of Miramar judge the success of Mr. Whittingham Gordon as the sixth city manager.  For now though, he is confidently telling the residents, businesses and leaders: “Don’t worry about a thing,” one of his favorite songs from the legendary Reggae icon, Bob Marley.