Francis Suarez is the New Mayor of Miami 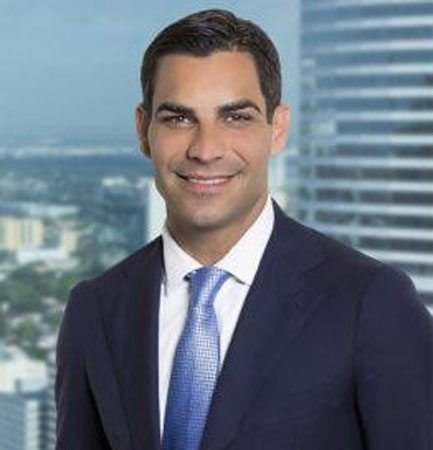 Francis Suarez is the New Mayor of Miami

The City of Miami has a new mayor. He is Francis Suarez who was convincingly elected from a field of four candidates in mayoral elections held on Tuesday.

Suarez who will replace Tomas Regalado who served as Mayor of Miami for the past eight years won convincingly with 86 percent of the votes cast, easily defeating his competitors Christian Canache, Cynthia Jaquith and Williams Alfred Armbrister Sr. Of the 13,754 votes cast Suarez, 40, won 11,790 votes.

Although a relatively young man Suarez is an experienced city politician, having represented the city’s District 4 for two terms. He is also from a political family. His father Xavier Suarez is a former City Of Miami Mayor.

It is expected that Suarez will be sworn in on November 15.

In Tuesday’s election, Suarez seems to have grasped the support of Caribbean Americans voters residing in Miami.

Linda Hall, said she normally don’t participate in municipal elections, but she was impressed by “the youthfulness” of the new mayor and his visionary approach. “Miami is one of the world’s  most famous cities, but enough is not being to make it a prosperous city, at least for the majority of people like myself who are from the Caribbean. WE need a young leader with vision, and I also like what Suarez said about improving the quality of life of the city’s residents.”

As a City Commissioner Suarez also served as Vice-Chair of the Miami-Dade Metropolitan Planning Organization, tasked with approving federally required plans and transportation policies, and as President of the Miami-Dade County League of Cities.

During his campaign for mayor said he is dedicated to elevating the quality of life of the residents he serves by way of focusing on transportation and connectivity issues within the city and beyond, nurturing the growth of a tech-based economy in the area and, by extension, job creation and international opportunities with Latin America and the Caribbean.

For more on the former Mayor of Miami, visit the link: Miami Mayor and City Commissioner reaffirm commitment to immigrants