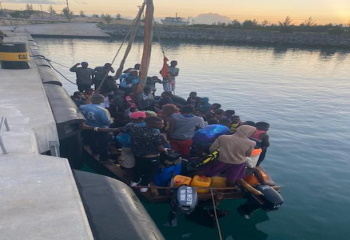 The Royal Bahamas Defence Force (RBDF) on Monday said it is seeking to remove an estimated 400 Haitian nationals from an uninhabited cay in the Ragged Island chain.

In a statement, the RBDF said that it had been informed by a fishermen on Sunday that a “suspected Haitian vessel was seen partially submerged off Flamingo cay”.

It said a group of individuals was also sighted on Flamingo and Water Cays, Ragged Island and that officials from Operation Bahamas Turks and Caicos (OPBAT) also were informed and proceeded to the area where they confirmed the sighting.

“Defence Force assets along with Police Marines and Immigration officials were also alerted, and were dispatched to the area, and are already on the scene while Her Majesty’s Bahamian Ships Lawrence Major and Lignum Vitae are enroute to Flamingo Cay and adjacent Cays to extract this latest group of migrants.”

The statement said that this latest incident follows the apprehension of over 500 Haitian nationals within the past week, adding that those individuals are currently detained in Matthew Town, Inagua, and are being processed by the relevant authority.

“The Royal Bahamas Defence Force continues to maintain a vigilant watch against the migrant surge, and remains committed to collaborating with local and international partner agencies, and the fishing community, while protecting the territorial integrity of The Bahamas and keeping our borders secured,” the statement added.