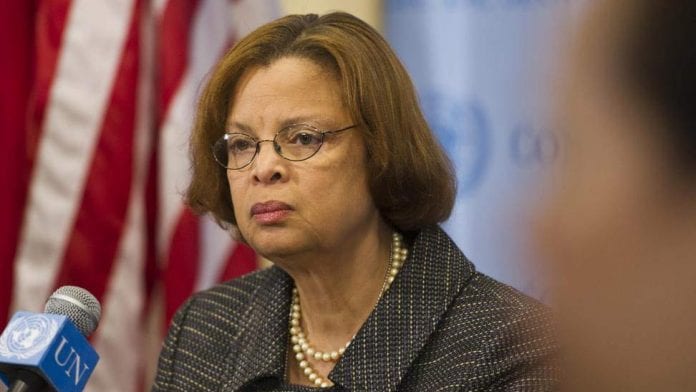 The head of the United Nations peacekeeping mission says Haiti’s stability and security is greater in the country ahead of the closure of the UN mission.

In her final briefing to the UN Security Council as head of the UN Stabilization Mission in Haiti (MINUSTAH), Trinidadian-born Sandra Honoré said Haiti has seen a “significant turnaround” from profound instability, widespread political violence and a climate of lawlessness that in 2004 impacted the every-day lives of millions of Haitians.

“Today, Haiti has a very different outlook. The Haitian people enjoy a considerable degree of security and greater stability; political violence has diminished; armed gangs no longer hold the population hostage. Thanks to the work of the national police – now 14,000 strong – which has grown significantly in numbers and capacity.”

MINUSTAH is mandated to assist the Haitian government in strengthening rule of law institutions, reinforcing national police capacities, and engaging in human rights monitoring, reporting and analysis, the UN said.

Honoré, who is also the UN Secretary-General’s Special Representative for Haiti, noted that when MINUSTAH was established in 2004, State authority had been weak and limited to parts of the capital, Port-au-Prince.

She said the three branches of power was, at the time, either non-functional or non-existent, and the national police force was overwhelmed by the multiple threats to public order and the rule of law.

The diplomat said that three and a half years later “Haiti has a very different outlook, despite the many challenges still facing the country.”

She said all three branches of power are in place in Haiti with the Executive and Legislative branches restored to full functioning, while the Superior Council of the Judiciary, created for the first time in 2012, remains in need of long-term fixes to allow it to fully play its role as the guardian of an independent and impartial judicial system.