Protesters call for reparations as royal family visits St. Vincent and the Grenadines 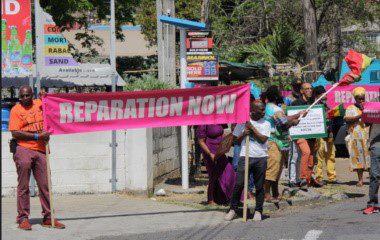 St Vincent and the Grenadines gave a red-carpet welcome to two members of Britain’s royal family, but a small group of protesters registered their objection to the visit and instead called for reparation for African slavery.

Prince Edward, 58, and his wife, Sophie, 57, the Earl and Countess of Wessex, were greeted by Acting Prime Minister Montgomery Daniel, as Prime Minister Dr. Ralph Gonsalves is off the island undergoing medical attention in Venezuela.

But the pomp and ceremony were overshadowed by a small group of protesters calling on Britain to apologize for its role in the African slave trade as well as to pay compensation.

She said that while some people might not agree, “we know what our forefathers went through; it’s in our DNA.

“We feel their pain and every time I talk about African brothers and sisters who had to struggle for survival in these ships and work for many years — 400 years of slavery — and still up to this day, we are not compensated.”

Jackson noted that at the end of the slave trade, it was the slave masters, rather than the slaves who were compensated.

Former chair of the National Reparations Committee, Jomo Thomas, who was among those demanding the apology and reparation, said “we just wanted to indicate, represent, manifest our disgust, our disdain and our concern that the neo-colonial government of St Vincent and the Grenadines would again, yet again, be welcoming and celebrating these people”.

The former government senator and speaker of the House of Assembly, said that under the Royal African Charter, the British were “responsible for the hunting down, kidnapping and trans-shipment of 60 percent of all of the Africans who were taken from the African continent”.

Britain and other European countries have dismissed the reparations call, saying that current generations should not be held responsible for acts committed by their forebears.

Thomas, however, said that it was only in 2015 that the British government finished repaying the 20 million pounds it borrowed in 1831 to compensate slave owners in preparation for the end of slavery.

“So if they finished paying in 2015, the argument that slavery is remote is nonsensical, it is farcical,” said Thomas, a lawyer and newspaper columnist.

St Vincent and the Grenadines is a constitutional monarchy, with the queen as the ceremonial head of state. In 2009, the population voted in a referendum to keep the British monarch and Thomas cautioned against using this as an indication of support for the monarchy.

During their one–day visit, the royals planted a tree at the Botanical Gardens in Kingstown, the oldest in the Western Hemisphere, and met privately with the acting prime minister.

They also met with women in leadership roles regarding the response to the April 2021 eruption of La Soufriere volcano and congratulated those who have recently completed their Gold Duke of Edinburgh Award. They also watched a local cricket match.