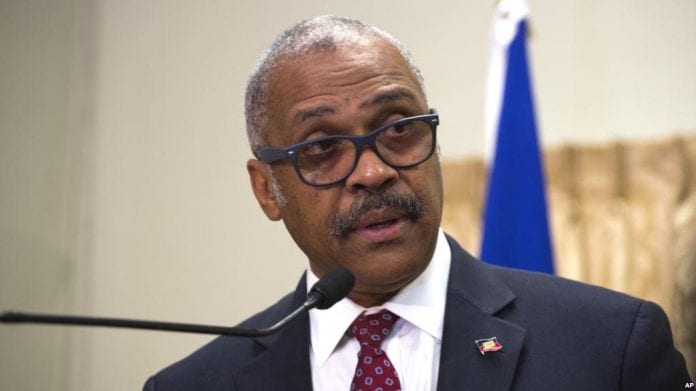 Prime Minister Jack Guy Lafontant has shied away from confirming whether or not Haiti’s new army will be officially commissioned on November 18, but promising it will not be one aimed at tormenting the population.

“It will be an army at the service of the population and not a tormenting army,” he told reporters, adding that the army in Haiti L had never been disbanded.

Never a dissolution of the Haitian Army

Lafontant said the 1987 Constitution stipulates that “the country has two security forces: the Armed Forces of Haiti and the National Police,” adding “there has never been a dissolution of the Armed Forces of Haiti (FAD’H) but only an administrative measure of demobilization of this military force.” He did not provide other details, claiming national security concerns.

There is mounting speculation here that the former armed forces of Haiti could be officially re-mobilized on November 18, coinciding with the 214th anniversary of the battle of Vertières.

Prime Minister Lafontant, who did not want to confirm this date, told reporters only that the time is coming and the remobilization of the FAD’H “is an act of justice for our ancestors and our heroes of independence and will allow us to repatriate our national sovereignty.”

Hundreds of youth have joined army

He said that after the launch of the recruitment process initiated by Defence Minister Hervé Denis, last July, 2,350 young people including 350 girls, had been registered in the army. The final steps in remobilizing the army will be undertaken in a transparent manner.

He reiterated that the new army will have another mission and another direction than that of the past.

Haiti’s army was disbanded in 1995 by former president Jean-Bertrand Aristide following a military coup. However, in recent months, there have been calls for the establishment of an army following the decision of the United Nations to end its operations here this month.

The UN mission in Haiti has been in place following a second coup against Aristide that took place in 2004.