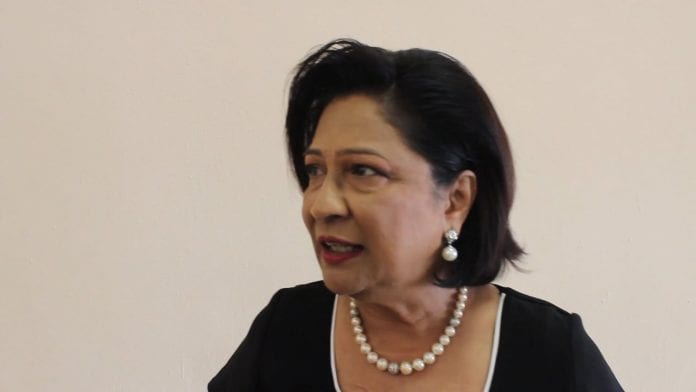 Former Prime Minister of Trinidad and Tobago, Kamla Persad-Bissessar, is calling for greater dialogue in the current impasse between Jamaica and the Twin Republic, over reports of Jamaicans being denied entry into the country. Speaking briefly during an event in Lauderhill last Thursday, opposition leader Persad-Bissessar says maintaining CARICOM unity is critical.

“We are not just Jamaican and Trinbagonian, we are CARICOM nationals,” said Persad-Bissessar. “We have a greater duty of care on the part of each of our states, and to ensure that we give that CARICOM status. We are like family.”

Persad-Bissessar, however, defended Trinidadian’s rights to enforce its own regulations within CARICOM laws.

“This conversation should be one of dialogue and negotiations.” said Persad-Bissessar. “It is a two way street, and every country has its sovereign borders and its sovereignty, therefore from those who are entering our country, as they enter any other country, there must be an understanding that there is certain conditions that need to be met.”

This follows recent news reports of Jamaican citizens being denied entry into Trinidad and Tobago. Denial of entry would technically defy the traveling rights specified under the CARICOM Single Market (CSME), which guaranteed the all qualified CARICOM national can live and work in any CARICOM state that participates in the Free Movement regime without the need for a work permit.

In response, President of the Private Sector Organization of Jamaica (PSOJ) William Mahfood called for a boycott on Trinidadian goods until Trinidad honors its obligations under the CSME, while some opposition legislators called for the situation to be brought before the Caribbean Court of Justice. With a bilateral meeting held last week between Jamaican and Trinidad and Tobago, both governments say they will continue to meet until a resolution is found on both ends.