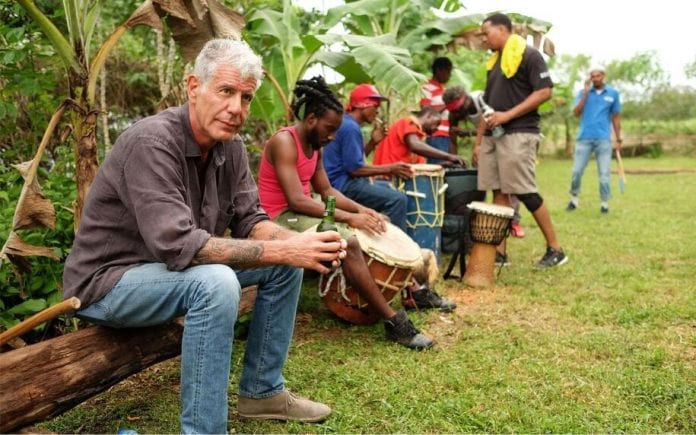 Celebrity travel guide Anthony Bourdain is not very popular in parts of Trinidad and Tobago, according to the Trinidad Guardian newspaper.

Bourdain went to the country recently as part of his ‘Parts Unknown’ series which airs weekly on CNN. Usually, he features the leisure spots of countries he visits; not so, this time.

“His recent documentary on T&T, which should have been an opportunity to showcase local food and culture, unfortunately turned out to be more of a crime documentary on the country,”   said Opposition Senator Daniel Solomon.  “It tended to focus a lot on crime. At the end of it one had to ask, had we not been Trinidadians looking at that video, would we have wanted to come to T&T under those conditions?”    Solomon pointed out in an address to the Senate on June 27.

“It was a sad indictment on T&T… we have to look at the message we’re sending out on behalf of T&T ,”she added.

Solomon referred to the video while debating an Opposition motion calling on the government to deal with another year of unabated crime. Bourdain’s hour-long expose aired on CNN June 25.

The most scathing part of his presentation followed the show in which Bourdain spoke to host Anderson Cooper about the dangers of living in Trinidad and Tobago. Solomon said Bourdain noted there were 460 murders in 2016 and that the capitol Port-of-Spain’s murder rate was higher than those in three major American cities: Detroit, Oakland and Chicago.

She conceded that, “The tragic part was a lot of it was accurate. It overshadowed everything beautiful about T&T; the doubles, Carnival, the food, our culture —T&T’s beauty.”

Solomon was even more ominous when she addressed growing talk of her country becoming a recruiting center for ISIS.

“It’s only a matter of time before an attack happens in T&T ,” she warned.