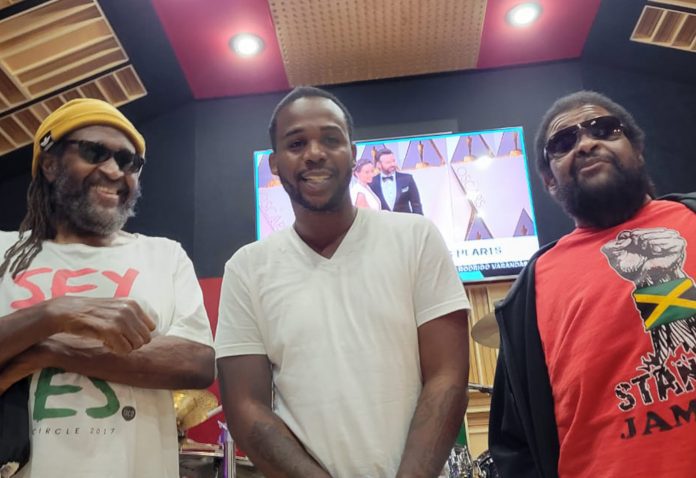 Popular dancehall star Teejay and legendary reggae band Inner Circle are Trending on YouTube Jamaica with their new song and video “Riches Wi A Pree”. The song was uploaded to Teejay’s official YouTube channel and is currently trending at number 18.

On December 31, fans of the ‘Uptop Boss’ were given a new year’s eve surprise with the video premiere and collaboration between the pioneering Grammy-winning group and the budding international dancehall star.

Depicted as a short film done by ‘Indian The Great’, “Riches Wii A Pree” currently has views upwards of 180,000 streams with its release courtesy of Circle House Films.

A determined young artist cycles off to the local plaza to sell CDs of his music after a crony tempts him to rob some men close by. After declining the offer, Teejay reaches his destination and parks his bicycle, then proceeds to a car that drives to the record shop in the area.

As the scene unfolds, a quick sample of Inner Circle’s famous hit “Tenement Yard” done with the late legendary Jacob Miller is heard.

To the young hopeful’s amazing surprise, the driver of the vehicle and its passenger happen to be members of the reggae band “Inner Circle” who Teejay quickly recognizes and tells them about the music he is selling. Inner Circle then invites the young artist to their studios. The connection between the musicians produces the heavy bass track “Riches Wii A Pree”.

“Long time man a suffer now a time fi stop, mi nuh wah see nuh gun mi nah go rise the glock,” sings as a positive note from the artist who is known for the songs “Have Mi Gun” done in 2017, and “Gun Smoke” released in 2020.

Back in May, Roger Lewis, the band’s guitarist and founding member mentioned in an interview that Teejay “is a nice bredrin, him come through an’ was doing some recording and wi hold a good vibe. We end up doing this song which we think can do well,” he said.

The song was recorded at Inner Circle’s studio in North Miami and is produced by the band.

PAHO issues warning for the Caribbean as COVID-19 cases soar