It’s been over a year since Jamaican-American, Grammy award-winning superstar Shaggy performed with his band in front of a live audience, but on July 4th, he delivered a stellar performance at the Florida Jerk Festival in West Palm Beach.

The festival, which was previously called Palm Beach Jerk Festival, rebranded this year and returned after a one-year hiatus to host its best staging ever, according to patrons.

Not only did Caribbean-Americans and other South Florida residents come out for the delicious jerk foods serves by vendors, but also to see Mr. Boombastic, who was the headliner for this year’s show.

Close to 10:00 PM, Shaggy hit the stage, dressed in an oversized, black shirt, a floral blazer and white jeans. He belted out hit after hit from his extensive catalogue, including favorites like “Angel”, “It Wasn’t Me”, “Oh Carolina” and “Mr. Boombastic”. He also did renditions of several other dancehall/reggae classics like Peter Tosh’s Buk-In-Hamm Palace and Beenie Man’s “Who Am I”.

Also putting their spin on Dancehall classics was St Vincent and the Grenadines Soca Skinny Fabulous, who performed his own songs as well as a few from several Jamaican artistes. “I spent four years in Jamaica. I love the culture,” he said while on stage.

In between Skinny Fabulous and Shaggy, was reggae group LUST, which comprises Lukie D, Thriller U, Singing Melody and Tony Curtis, who had the crowd rocking to renditions of reggae classics, a ska medley, gospel, and their usual love songs.

The combination of delicious Caribbean food, a star-studded lineup and the stronger-than-ever-desire of South Florida residents to go outdoors resulted in over 10,000 attendees for this year’s staging.

“Bringing LUST, Skinny Fabulous and Shaggy onboard this year, we knew we had something special. But the attendance exceeded any expectations we had,” said Damian Tater, CEO of Florida Jerk Festival.

“There were Jamaicans who came from as far as Atlanta for the festival. The support from the diaspora was incredible and we’re really grateful,” he added. 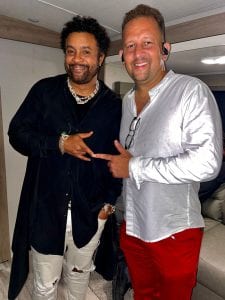 Also showing their support at the event was Jamaican-born Broward County Commissioner Dale Holness and Jamaica’s Consul General for the Southern United States, Oliver Mair, who gave his rendition of the Michigan and Smiley’s hit, Nice Up The Dance.