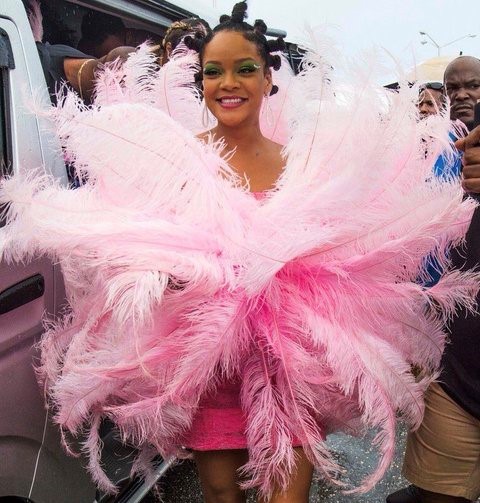 BRIDGETOWN, Barbados – At Barbados’ annual Crop Over Festival that culminated on August 5, all eyes were on Bajan beauty Rihanna who returned home to join in the fun after missing last year’s festivities.

The Crop Over Festival in Barbados is a 3-month-long celebration that ends with the massive Grand Kadooment Parade in August of every year. Many revelers save the best of their carnival outfits to take part in the festivities at the end of the Crop Over period.

The 31-year-old singer, who is no stranger to Crop Over, ditched the regular carnival costume typically worn at Crop Over, to sport a hot pink mini dress covered in pink feathers along with embellished pink heels.

Rihanna traveled through the streets of Bridgetown on the Aura Experience Truck, surrounded by friends and family, while taking pictures with doting fans when she could. She even managed to snap a few photos with Prime Minister of Barbados, Mia Mottley.

Despite moving from Barbados to the United States as a teenager to pursue, and achieve, a successful music career, Rihanna has managed to keep in touch with her Bajan roots, returning to the island for Crop Over every two years since 2013.

Crop Over in Barbados is a 200-year-old tradition that was used to signal the end of the yearly sugar cane harvest on plantations on the island during the 17th century.