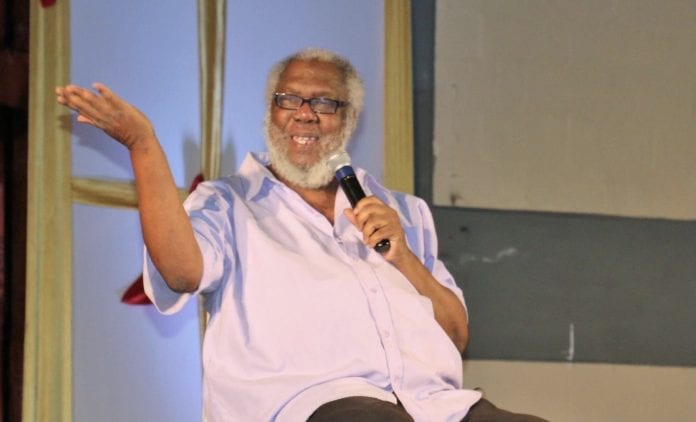 Last weekend, Trinidad and Tobago’s entertainment community said their final goodbyes to one of its most popular comedian and cultural historian, Dennis “Sprangalang” Hall.

Hall had died on October 2, 2020—two days after his 71st birthday and was cremated following a tribute ceremony on Saturday, October 10.

Since his death, musicians, public figures, politicians and fans alike have paid their respects to the man that was considered a “comedic genius.” After news of his passing, Trinidad and Tobago’s Minister of Tourism, Culture and the Arts Randall Mitchell issued a message of condolences to Hall’s family, while describing him as a man whose “talent knew no boundaries,” as a comedian, storyteller, actor, talk-show host, writer, producer and director.

The former member of Parliament for San Fernando East wrote, “TT’s entertainment landscape was made richer by his engaging performances and humorous take on life. Sprangalang was a giant in the industry and a cultural icon. He will certainly be missed.”

Sprangalang had been ailing for some time and his passing, which comes just six months after the death of his brother, Trinbagonian playwright Tony Hall, leaves a major gap in Trinidad and Tobago’s artistic and entertainment community.

Hall was born in Port of Spain in 1949. He attended Naparima College, San Fernando and then later gained a bachelor’s degree in drama and education from the University of Alberta (1969-73), with the hopes of becoming a teacher.

On his return to Trinidad in 1974, Hall met Christopher Laird—who would later become one of the most renowned filmmakers in the country—at the Trinidad & Tobago Television Workshop, which later formed Banyan Limited, a local video production house.

Laird invited Hall to Gayelle, a national TV series produced by Banyan. Hall portrayed the character “Draxi” on a segment called “Cultural Sprangalang.” Hall went on to contribute to over 300 episodes and became a household name in T&T, widely known as “Sprangalang.” During that time, Hall also obtained a diploma in film and advanced television production at the Northern Alberta Institute of Technology (1978-80).

Hall presented clever social commentaries about TT culture, usually featuring an exaggerated Trinidad dialect, as an actor. On stage, he sported an iconic scruffy beard and loose button-up t-shirt, which many said was in stark irony to his intelligence and upbringing, especially coming from a middle-class family. His father was vice-principal at Hall’s alma mater, Naparima College.

He presented himself as a versatile artist, dabbling in all the art forms including TV, film, composing and singing.

Among his most prominent dramatic roles viewed internationally was his role in the first Caribbean-Canadian sitcom, Lord Have Mercy in 2003 and A Winter Tale, a 2007 award-winning film.

He also co-starred in the 2010 play, A Man in the Bedroom, along with his friend and long-time fellow stage performer Errol Fabien.

In the late 1980s, Hall was made an honorary member of the Trinbago Unified Calypsonian Organisation (TUCO). Hall was TUCO president in the 1990s, succeeding the organisation’s first president Winston “Gypsy” Peters. He also performed a Late Night Lime series, consisting of 14 parts, in 1990.

He was then honored by the National Action Cultural Committee at the 2012 Top 20 Stars of Gold Awards for his contribution to cultural development in Trinidad and Tobago.

In June 2019, Hall spent nearly two months in the hospital after having seizures which led to a mild stroke. Earlier this month, he died from complications caused by the stroke.

He is survived by his wife, 2019 Calypso Queen Natasha “Sexy Susie” Nurse and one daughter.