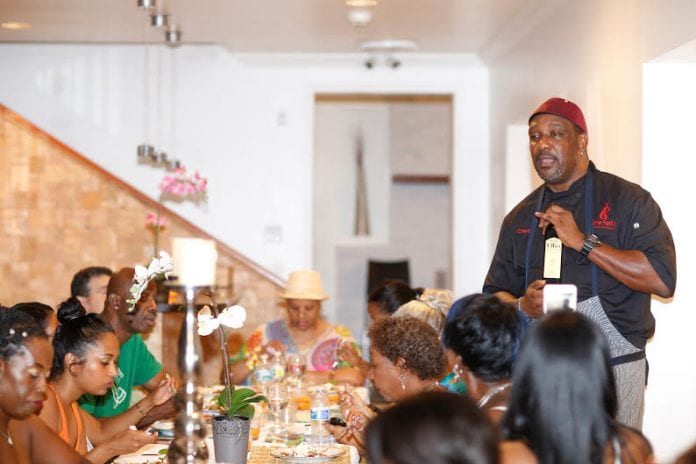 Have you ever wished a “real live” chef could cook for you?  Ever thought about having a five-course dinner professionally done in your own kitchen?   Well, now you can, with the innovative and down-to-earth Chef Irie.

The popular Jamaican maestro offered a scrumptious dinner on July 30 at the North Miami home of Sonya, his long-time friend.

This was the second of its kind; the first took place at the home of Michele Henney, his partner.

Sonya’s home has a huge yard, pool, two gazebos and a children’s play area. It was the perfect setting for an enchanting dinner.

The evening’s menu consisted of:

According to Chef Irie, intimate settings are “a chance for me to really explore food in ways I don’t often get the opportunity to do. This dinner was great.  It was different too because of the entertainment component.  The food was even better because I felt I was ‘ramping’ it up, the ideas, the component structure.  I was truly happy with the host.”

Entertainment was led by Dita, an Indian poet and painter who performed spoken word pieces about people of color and the current political climate in America.

Talented singer La Vavie, along with her pianist, performed a mixture of elevator music and sounds from the Caribbean.

Popular photographer David Muir documented the evening. He hinted that Chef Irie will be coming out with a book soon.

Guests were impressed by food and performers.

Valentina said, “I really enjoyed the food, the setting. I’m not used to it, but it was really pleasing.”

Sharon said, “Awesome was the experience for me, different really good.  It was a good experience.”

Dr. Patricia Elliott said, “I usually don’t’ try new things. Usually I don’t eat stuff I don’t know, stuff I can’t identify. This his has been a surprise to myself; an amazing dining experience introducing me to a whole range of foods.”

Chef Irie was born in Kingston, Jamaica, but raised in St. Catherine. He discovered cooking as an eight-year-old watching his mother cook.

Growing up, cooking wasn’t seen as a “real” career.  So, he chose to go into something “career-worthy” and studied architecture at University of Florida from 1990-95.

After working as an architect for several years, he was encouraged by his ‘ex’ to try his “cooking thing.” He applied to the only then accredited culinary school in Miami, Johnson and Whales, and got accepted.  He later graduated with an associate degree in the Culinary Arts.

Why the name Chef Irie?

“I was trying to have a link to my country.  I felt strongly about what I was doing. I wanted a name mentioned in the household not only nationally but globally,” he said.

He has no regrets about turning his back on architecture for life in the kitchen. “You don’t get tired of cooking:  I don’t cook as much for myself. The motivation to cook for others is greater than myself,” he said.