From the moment you exit Piarco International airport in Trinidad and Tobago and you’re immediately greeted by the sweet sounds of the native steel pan playing the popular groovy Soca tune “Hello” by Kes the band, you know it’s carnival time again.

The jubilant vibrations are thick in the air and can literally be felt around every corner of the twin island. From Arima to San Fernando, as far south as Cedros (the islands southern most town) to the capitol of Port of Spain- the celebration brings out the countries most talented artists, chefs, artisans and costume designers for two months of sheer majesty and ‘bacchanal’.

It is this allure that attracts thousands to T&T’s shores annually to partake in the pre-Lenten celebration. With the vast array of musical, foodie and cultural experiences available, it’s easy to discover and enjoy something new every time you attend. Trinidad Carnival literally captivates your senses. Here’s how:

When you taste the national snack ‘the doubles’ hand crafted by Sean the doubles man in Grand Bazaar shopping center. He shapes together two perfectly fried patties of dough known as “barra” topped with seasoned chana piled with fixings like tamarind, cucumber and peppa sauce. He can barely keep up with the demand of tourists and locals alike flocking to his cart to taste the popular street food but somehow he makes due. This is carnival.

When you sip the freshly cut coconut water from famed coconut man Franklin near the Queen’s Park Savannah where he prepares the drink to your liking; straight from the coconut with a side of jelly, from the jar or on ice with a touch of scotch. This is the taste of carnival.

Music thumping “in your soul”

When you can feel the music thumping deep in your soul as you rise on less than a few hours sleep to get up and go again to yet another fete to take in the sounds of some of the world’s biggest Caribbean DJ’s and internationally recognized artists like: Machel Montano, Bunji Garlin, Kes the Band, Calypso Rose, this is carnival.

An important note that must be made; no other music genre is quite like Soca (derived from Calypso music). The Soca genre operates on a seasonal basis and demands new content from its artists every season in time with the upcoming carnival. This is part of the uniqueness and sheer talent of the Soca artists; the ability to produce hit after hit year after year without fail. This is Carnival.

Learning the history of where Trinidad’s carnival and calypso music started, it was important for me to take in the traditional Canboulay Festival in the heart of Port of Spain’s Piccadilly Square where the reenactment takes place annually. The riots were a forceful opposison by the slaves for the ability to partake in the celebrations at all. At 3a.m. sharp on carnival Friday, thousands surround the actors who reconstruct the riots including homage to the stick fighters and fire breathers of the past. If it were not for the Canboulay riots, there would be no carnival in its current form. For this very reason, Canboulay is one of the most attended and revered events during the season. 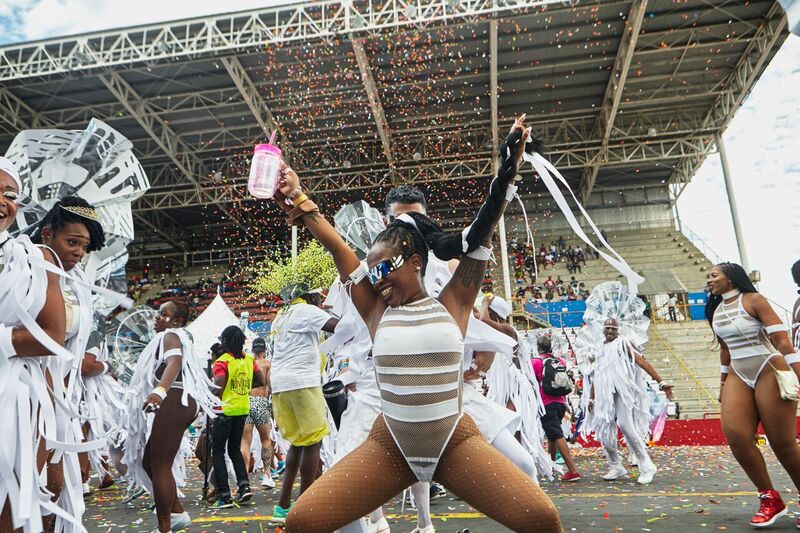 Tribe/Bliss Mas Band
Carnival in its grandiose nature is so special because of the small moments captured and experienced that make each visit truly unique. With that being said, 2018 was no exception. This year, I had the opportunity to embed myself in the festivities through the eyes of a Tribe/Bliss Mas Band Masquerader (a fully costumed reveler on carnival Monday and Tuesday).

As carnival continues to grow and attract new audiences, so does the demand by its leaders on the island to think bigger and differently to keep up with the demand while holding true the traditions of the past. Dean Ackin- founder of the Tribe/Bliss Mas Band that began in the early 2000’s has managed to successfully do just that as the culture evolves.

For revelers craving the all-inclusive experience on the road, Ackin has mastered the art of giving patrons just that. With the expansion of his band, so large that the T&T carnival association had to create another crossing point at the SocaDrome stadium due to large band traffic, Ackin continues to navigate and lead in this respect.

Unique, all-inclusive experience
Tribe, Bliss, The Lost Tribe and now Carnival Rogue (his four breakout mini bands) each deliver a unique all-inclusive experience depending on your preference. Imagine two days of non-stop reveling throughout the streets of Port of Spain in the costumery or your choice. Chipping down the road with your crew that you’ve wanted all year to see. As long as you have that wristband, you’re good! This is carnival.

Paying homage to the Trinidad and Tobago’s rich tradition while continuing to push forward, this is carnival. The many people of the twin islands understand its importance and significance and each in their own way use their platforms and tools to continue to forge the tradition forward. And in the words of Soca artist Patrice Roberts with her latest tune, carnival it “Sweet for days”, and we couldn’t agree more! It truly is!