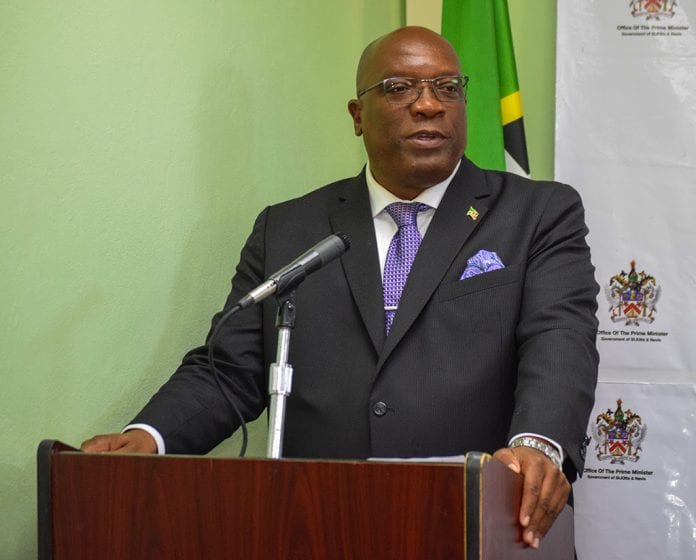 Prime Minister Dr. Timothy Harris on Thursday said that 164 jobs were lost during the first half of this year, as the twin-island Federation shut its borders and implemented other measures to curb the spread of the coronavirus (COVID-19).

He said that the relatively strong employment figure is due to the fact that Four Seasons hotel, up to June, retained the majority of its workers on its payroll.

He told reporters that by June, employment was up by eight per cent in the manufacturing sector and public administration and defence. Declines were recorded in wholesale and retail, hotels and restaurants and transport, storage and communication ranging from three to five per cent respectively.

“During this period, the non-government sector recorded a loss of 831 jobs while the public sector recorded an increase of 666 jobs for a net job loss of 164. The employment situation during the third quarter is likely to change, with layoffs of employees by Four Seasons probably having the most dramatic impact,” Harris said, adding that this decline is likely to be mitigated by increased employment in the manufacturing sector largely driven by the removal of restrictions on business operating hours.

Harris said that his coalition administration, which is into its second consecutive term in office, had inherited a Severance Fund, which had been in the red and had hundreds of former employees dissatisfied with the lengthy delays in receiving payments.

“We have been addressing these issues in a careful manner so as not to further haemorrhage the Severance Fund. Additionally, to correct errors and the neglect by the former administration, my government has procured the services of an actuary to make determinations on how the financial viability of the Fund can be sustained to protect employees in the future,” Harris said, adding “we await that study and subsequent discussion by the tripartite committee”.

He said that the unsustainability of the present legislative mechanisms for the management of the Fund has been further magnified by the COVID-19 layoffs.

According to Harris, as at September 22, this year, the Department of Labour has received 1,800 claims and it has been working “assiduously” to process these claims in preparation for payment.

He said in keeping with the government’s commitment to the stronger and safer future, the Protection of Employment Act will be revisited to address several matters including the sustainability of the Fund, eliminating abuses, rationalization of pay outs and recalibration of the Fund in the context of emergencies and pandemics.

“We are anxiously awaiting the input from the other participants on the National Tripartite Committee – specifically the Chamber of Industry and Commerce and the workers’ representatives,” he told reporters.

The extension to customers is based on an assessment of their financial condition by their respective commercial banks.

“In addition to the deferral of payments, a waiver of late fees and charges will be applied to qualified customers during this period. Going forward, the loan repayment deferral programme will be based on an assessment of the financial condition of customers. Each member bank will advise its customers of the details and processes for the support programme.

“So far, some 2,137 persons in St. Kitts and Nevis have applied and been approved for the moratorium on mortgages totalling EC$455.6 million,” Harris said.

The programme also benefits customers in other ECCB served territories like Antigua and Barbados, Dominica, Grenada, St. Lucia, St. Vincent and the Grenadines and Montserrat.