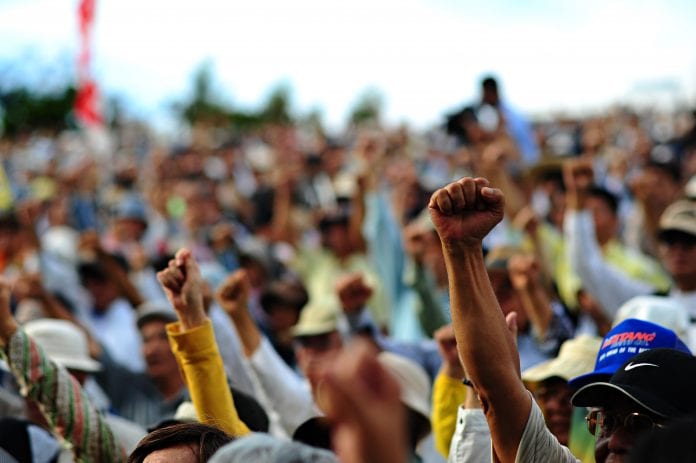 As in other American cities, residents of multiple races is responding to last week’s shooting death of two black men, Alton Sterling and Philando Castile, by law enforcement officers and five police officers in Dallas.

Last weekend there were several peaceful marches organized by Black Lives Matter, involving hundreds of protestors in West Palm Beach, Fort Lauderdale, and Wynwood. More protests are planned for the coming weekend end, including a march in Miami Gardens.

Marcell Grant, a St Lucian-American was among over 700 protestors that marched from Stranahan Park in Fort Lauderdale on Saturday night to the Broward County Jail, chanting among other slogans,  “No justice, no peace.”  Grant, 34, the father of two sons, said “I am grieved by the tragic shootings of the Dallas cops, but would be dishonest if I didn’t say I protested because I am also grieving for repeated shootings of black men by irresponsible police action. I march because this could happen to me or my sons.”

Before the Fort Lauderdale march, the participants were given forms to complete in case they were arrested and needed to contact relatives to free them from jail. However, police officer, Nigel Boothe, said, “The marchers strictly abided by the law.”

In West Palm Beach, Wayne Jonas, 20 year-old son of a city police officer, said he “had no alternative” but join the protest in that city “as all lives matter including that of Palm Beach Gardens’ Corey Jones who was Killed by a police office last year, and police officers shot doing their  duty. I’m black, and my father is a police, so my reason to protest is two-fold.”

Miami Garden nursing-aide, Mimi Lagorde, also a parent of two sons, says she’ll “definitely be marching. With the disgust of people in the community with the killings of black men and police, I’m sure there’ll be more than 200 protestors.”

Protestors will march from the Miami Gardens City, through city streets and back.

Churches in the region are also protesting the shootings and racial divisions in the country.

At the North Miami Avenue Church of God members of the congregation prayed for the victims of gun violence. “None of what’s happening is right in God’s sight,” said Norma Bayliss. “Nobody should be killing the police, and the police shouldn’t be killing residents without just cause.”

In Miami ten South Florida pastors collaborated in an anti-gun violence rally at the Miami Police Station last Friday. Following prayers, the pastors addressed community concerns related to the shootings, asking people to unite in faith, peace and love, and for the community and law enforcement to work together because “as one unit we can make a difference.”

On Wednesday, a group of Broward pastors headed by Caribbean American Rev. Dennis Grant, and community leaders participated in a motorcade and prayer vigil for “All Lives Matter” at the Reverend Samuel Delevoe Memorial park in Fort Lauderdale.