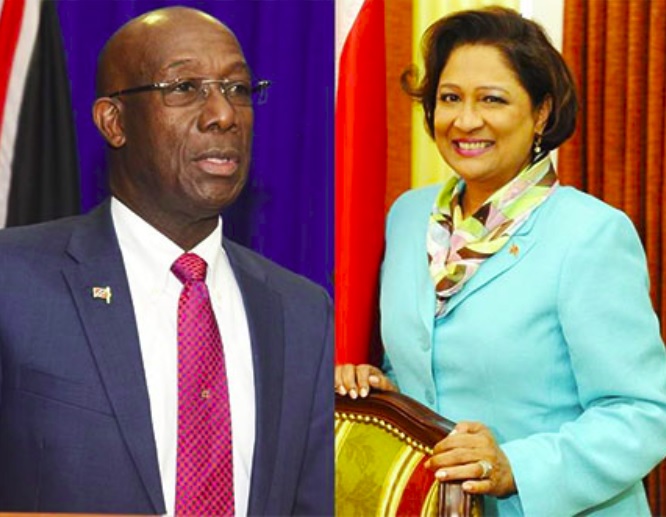 Prime Minister Dr. Keith Rowley of Trinidad and Tobago has requested a meeting with Opposition Leader Kamla Persad Bissessar to discuss the successor to President Anthony Carmona, who is scheduled to leave office in March at the end of his five-year term in office.

A brief statement from the Office of the Prime Minister on Tuesday said that Rowley had suggested that the meeting be held on Friday “to discuss the nomination of an individual(s) for election to the position of President of the Republic of Trinidad and Tobago”.

Dumas  – not a contender

Late last month, Reginald Dumas, the 82-year-old former special adviser to the United Nations Secretary General on Haiti, had ruled himself out of contention to succeed Carmona indicating that he wanted ‘to make it clear that I am not, repeat not, a candidate for the presidency, and have no intention whatsoever of being, or even seeking to be a candidate”.

There had been speculation in the local media that the former head of the public service had been regarded as one of two candidates being pursued by the main opposition United National Congress (UNC) when the Electoral College meets on January 19 to elect a successor to Carmona.

Media reports had also indicated that apart from Dumas, the UNC is also considering retired High Court Judge Gladys Gafoor, while the ruling People’s National Movement (PNM) is said to be considering retired judge of the Caribbean Court of Justice (CCJ), Rolston Nelson.

Since becoming a republic in 1976, Trinidad and Tobago has had five persons elected to the largely ceremonial position as head of state. No woman has ever held the position.