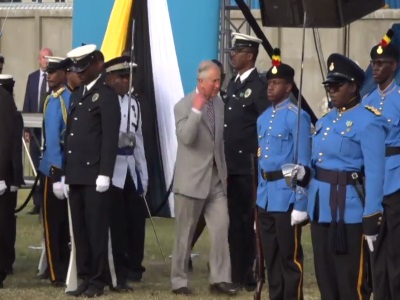 VIEUX FORT, St. Lucia, CMC – Britain’s Prince Charles arrived in St. Lucia on Sunday at the start of a two week visit to the Caribbean, highlighting the impact of climate change on the development of small island states like St. Lucia.

Prince Charles and his wife, Camilla, the Duchess of Cornwall, will also visit Barbados, St Vincent and the Grenadines, St Kitts and Nevis, Grenada and the Cayman Islands.

They will also become the first members of the Royal family to pay an official visit to Cuba with Buckingham Palace saying that the trip to the region is to “celebrate the Monarchy’s relationship with these Commonwealth Realms”.

The Royal couple arrived in the southern town of Vieux Fort and were met by local dignitaries including Governor General Sir Neville Cenac and Prime Minister Allen Chastanet.

Prince Charles is participating in activities marking St. Lucia’s 40th anniversary of political independence from Britain during his three-hour stay.

Speaking at the Military Parade and Schools Rally, Prince Charles said that there’s no greater challenge facing the global community that climate change, noting that it provides ‘an existential threat to this island as it does to every part of this region.

“I saw for myself the devastation that hurricanes Maria and Irma wrought in Dominica, Barbuda and the British Virgin Islands when I visited those communities in November 2017.

“Tackling the truly alarming threat of climate change and finding some ways of mitigating the risks it presents is and must continue to be a top priority for the Commonwealth,” he said, noting that he was pleased that St. Lucia is benefitting from a project through the Commonwealth Marine Economies Programme.

He said the mapping of the island’s seabed “will not only inform our understanding of the effects of climate change but has the potential to help develop St. Lucia’s vital blue economy in significant and sustainable ways”.

In his address in which he congratulated the island on its 40th anniversary of political independence, Prince Charles said he had “great hope’ for the future of St. Lucia.

“This is a strong society…and one which places special emphasis on family and community. As you celebrate this year everything that St. Lucia has achieved over these four decades of her independence, I know that you also take pride in committing yourselves to building the strongest, brightest future for this country,” he said, noting earlier that the road to independence had been “long and took many turns”.

Prince Charles, who had presented the Commonwealth’s “Points of Life” award Dorothy Phillip, the founder of a cancer foundation here named “Faces of Cancer,” said he could only wish that “St. Lucia and her people continue to thrive and to flourish”.

Earlier, Prime Minister Chastanet said despite its size, St. Lucia has achieved “so much, but we can’t survive on our own”.

He said the island’s membership of the Commonwealth, the Organization of Eastern Caribbean States and the Caribbean Community (CARICOM) is a recognition of ‘how effective we could be together”.