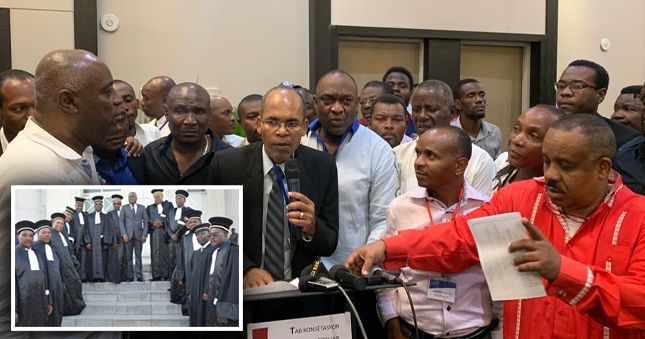 PORT AU PRINCE, Haiti – Five opposition parties in Haiti, namely the Consensual Alternative, the Institutional Opposition, the Patriotic Forum, the Democratic Bloc and Mache Kontre, have agreed on the interim President and Prime Minister if current president Jovenel Moise should step down.

The agreement states that the President of the Transition is to come from the Court of Cassation while the Prime Minister will be appointed by a committee composed of representatives of these five entities and two members of the Gateway who will be observers.

This committee will determine the criteria for choosing the president and the prime minister. This committee will work on a roadmap and a central body for the control of government action, said Lemete Zephyr, spokesman for the Gateway after the second day of discussion of the Table de Concertation, at the Marriot Hotel, Saturday, November 9, 2019.

The agreement drafted will be signed Sunday, said Lemete Zéphy, noting that civil society in several of its components participated in the work. “Many people thought that we would not find an agreement. But today, we have seen that Haitians can get together, “said Lemete Zephyr.

“The hypocrites are astonished,” said Senator Sorel Jacinthe, of the Institutional Opposition- the entity making up the Alternative Consensual. “Five blocks, seven platforms, with the exception of Fanmi Lavalas who has reservations, have reached an agreement on the choice of president who will leave the court of cassation. And we found an agreement for the Prime Minister to come out of the plural opposition. We sit together to assemble the authority of handover and control and make the roadmap, “he said.

“Between Haitians, between the five blocks, we found an agreement, we found the consensus and we say to Jovenel, leave,” added Senator Yuri Latortue of AAA, member of the Alternative Consensual. “Today there is a big step forward. Haitians have shown that they are adults. Tomorrow, we will all demonstrate together to tell Jovenel to leave, “said the senator of Artibonite.

“It is a rare time that Haitians met in difficult times to find a national solution. We found the national solution. We call on the people and the country to support this solution to show once again to the world that Haitians can sit down to make state decisions to steer the country in the right direction, “he said. former deputy Serge Jean-Louis of the Alternative Consensual. “The agreement we have found is very clear that we are ready to change this country through our fight to change the system of oppression,” he added.

For Gennard Joseph, de Mache Kontre, people will no longer be able to say that Jovenel Moïse remains in power thanks to the division of the opposition forces. Political actors, despite their differences, have given priority to the people. Tonight (Saturday), there is no division at the level of the opposition, “he argued before addressing the international community:” to the Core Group and the international community, we say that we agreed and that we chose to push Jovenel Moses to the exit. The loop is complete for Jovenel Moïse and the PHTK. It’s finished. The mobilization will continue, “he said