Jamaican Opposition Senator, Damion Crawford says he is of the view that regional tourism may not make a complete recovery from COVID-19 until June 2021.

Analysis of the World Travel and Tourism Council’s data shows that the Caribbean is the most tourism-dependent region in the world. 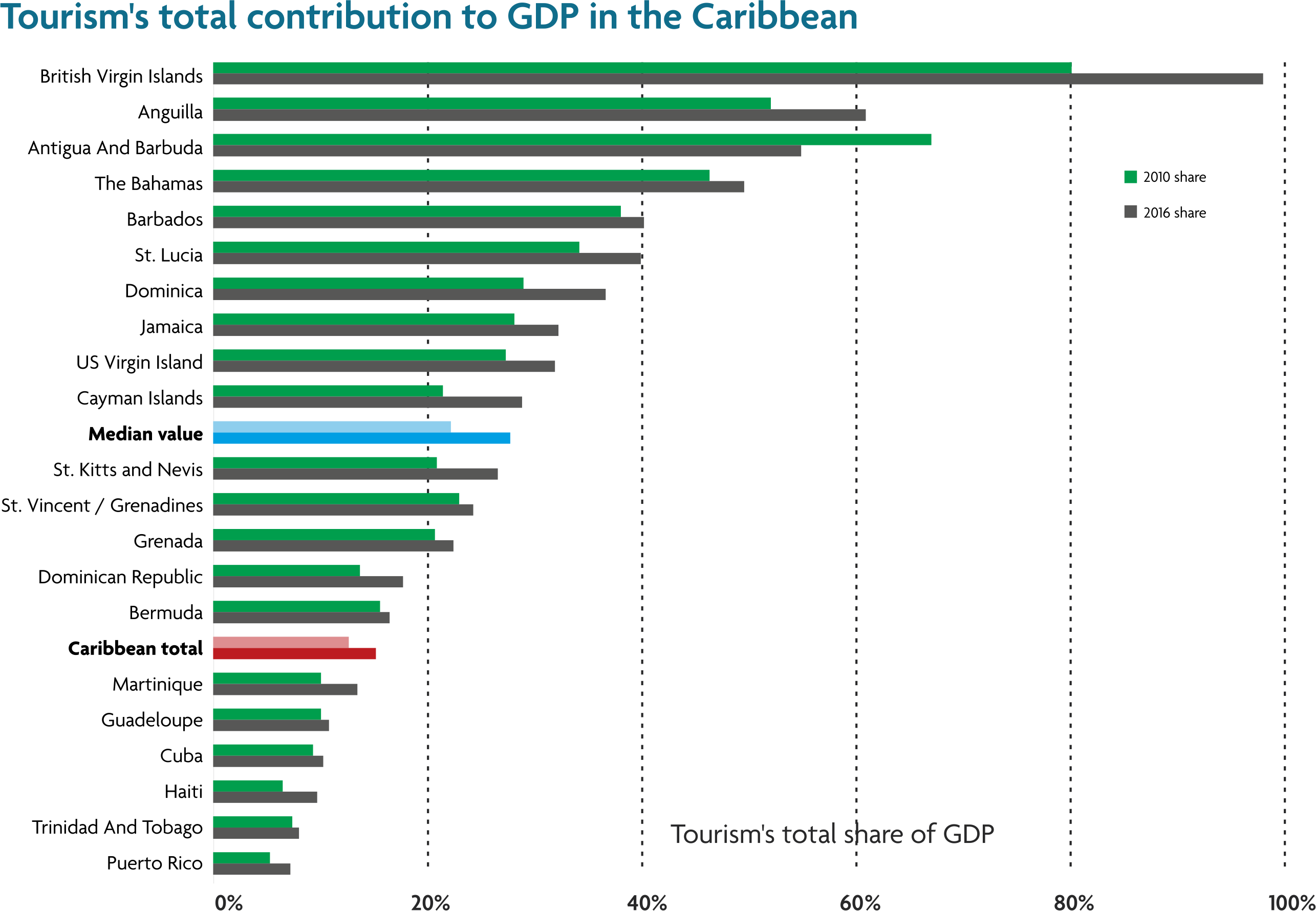 The chart shows the importance of Caribbean nations having the ability to plan effectively for the likely impacts of delayed recovery.

For the purpose of this article, recovery will be assumed to include the achievement of the following four (4) realities:

Further recovery will be defined to mean:

For the Caribbean, the first hurdle to cross is likely visitors’ perception that their home country (USA, Canada, and Britain) is safe. Our first hurdle will, therefore, be dependent on the estimated end of new cases emerging in those countries. The Mayor of New York City, Bill de Blasio, suggests that the peak is expected at the end of April. This would indicate that the approximate end date for new cases could be June 30. Further, it is reasonable to assume that the State Department and the Centers for Disease Control and Prevention (CDC) will not lift the Level 4 travel advisory until at least a month after the last reported new cases. This is a reason for great concern for the Caribbean because perceived home safety will likely be attained by the prospective traveler before August 1.

Hypothesis 1: The perception of Home Country Safety will likely be achieved August 1, 2020.

Perception of Safety of Host Country

The best example of a health risk in a host country is the 2013 outbreak of Ebola in West Africa. It is my hypothesis that the perception of Third World healthcare increased the risk perception of visiting West Africa after Ebola ended, which will likely be the Caribbean experience.

In fact, tourism to Sierra Leone was down 50% up to 11 months after the last reported case of Ebola in April 2016.  What’s even more telling, was the negative impact on other countries in Africa, including those further away from the epicenter than some European nations. This suggests that the Caribbean will start to recover in the area of “perception of host safety” when all Caribbean nations successfully fight COVID-19.

Using the Sierra Leone experience, perceived safety in the host destination was achieved four months after the last case was reported. By taking Western society’s negative perception of Africa into consideration, it is my opinion the best case for the Caribbean is a rebound twice as fast.

Hypothesis 2: The prospective visitor’s perception of it being safe to travel to the Caribbean will be achieved two months after the travel ban is lifted, thus November 1, 2020

The next hurdle to recovery is the formation of travel intent. Indeed, almost immediately after the virus abates there will be a desire to travel, but this may not be matched by action. Many factors will impact this, including the financial situation in the home country; the availability of flights, particularly direct flights; the promotion of staycations; the season and the prices being offered.

Tourism is perceived as a luxury good. In times of uncertainty, luxury spending is often shelved because consumption is generally replaced by savings. It is also likely that all routes will not immediately receive critical mass to fly profitably to all destinations. Thirdly, many countries will likely promote staycations as a safer, more patriotic alternative to international vacations; this may threaten the Caribbean if the fear of airports as a likely area of contamination persists.

Additionally,  with the world expecting great financial fallout and high job losses, the period between travel interest and travel intent may be three-to-four months. Stock analyst, Dan Wasiolek, argues that international travel is likely not to rebound before 2021. He goes further to argue that airlines may have to endure another seven months of significantly reduced demand before “pent up demand” kicks in by the end of the year.

Further, I expect all destinations to be discounted, thereby reducing the drawing power of the discounted price. Travelers may also generally fear being guinea pigs for the travel industry and may await confidence building.

Hypothesis 3: While the interest in travel is expected to immediately peak leading to high information-finding activities, it may take another three (3) months to initiate action on travel interest; this suggests, February 1, 2021.

Finally, the Caribbean’s tourism industry recovery will be impacted by the ability to travel and the likelihood to choose the Caribbean. Having already considered the financial instability, one must also consider the constraints faced on the path to purchase. This includes, getting time off from work, etc. Research done by SOJERN, shows the average path to purchase takes more than 60 days and seldom less than 30 days.

The return to pre-COVID-19 numbers may also be delayed by stay-at-home promotions and motives. A study done in the United States in 2002 suggested that 39% of respondents were less likely to travel abroad due to 9/11 attacks.

The Caribbean could also be crowded out of advertising space by developed countries with large promotions budgets. In mid-2002 New York and Britain spent approximately US$30 million and US$57 million respectively on tourism rebound campaigns.

Hypothesis 4: By using the post-9/11 tourism market as an example, it is safe to add another four months to the travel intent period for numbers recovery. Thus June 1, 2021.

It is, therefore, my opinion that the most likely scenario for the Caribbean to see the light at the end of the tunnel will be circa June 1, 2021, en route to the achievement of 80% post-COVID-19 numbers by December 2021.

Damion Crawford is an entrepreneur, marketing and tourism lecturer and the former Minister of State in the Ministry of Tourism and Entertainment in Jamaica.