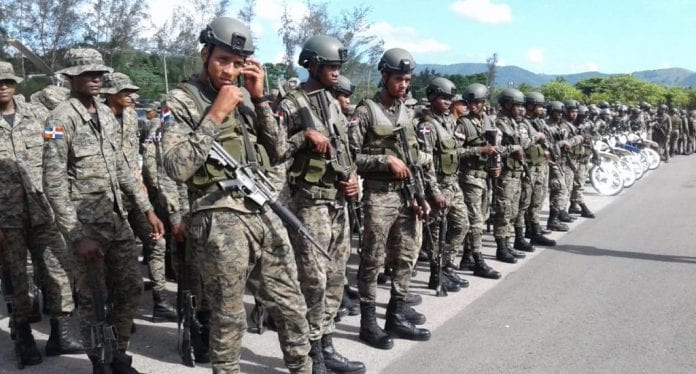 Nearly 10,000 soldiers from the Dominican Republic have been deployed to the border it shares with Haiti in an effort to contain the illegal trafficking on undocumented migrants.

The strong military presence at the border that separates the French-Speaking Caribbean Community (CARICOM) nation from the Dominican Republic on the island of Hispaniola, was ordered by Lieutenant General Carlos Luciano Díaz Morfa, the Minister of Defense in the Dominican Republic, who explained that the armed forces manage and improve actions to control the illicit trafficking of people, goods and drugs.

“The old-fashioned idea of ​​a neglected, poorly guarded border region, laden with ill-equipped and isolated military posts, is a thing of the past,” the neighboring country’s top military official said earlier this week.

The Minister of Defense revealed that border surveillance is in charge of 8,672 members of the army, who have now been joined by 153 navies, 83 from the air force, 702 from the Specialized Corps of border security (Cesfront), 18 from the specialized port-security corps and 120 intelligence specialists from the Joint Chiefs of Staff.

He said the bulk of the 9,748 deployed across the border is made up of officers, soldiers who are all part of the security and defense system of land and sea borders.

The visual surveillance system is connected to the Command, Control, Communication and Security Center-C5i to monitor, in real-time, all movements at border crossings, military posts, checkpoints, informal routes and other means.

Díaz Morfa said the move is in an effort to develop a strategy to monitor informal crossings that are detected in steep areas where it is difficult to travel, often used as roads to bypass surveillance.

He said the operation is for the protection of the border strip and constitutes one of the priorities of his ministry, of its armed forces and specialized units, being one of the main axes of its current strategic plan, approved by the state-major for the period 2021-2024.